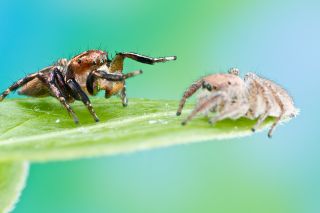 A hopeful male jumping spider woos females that might not be the correct species for his amorous attentions.
(Image: © UFL/IFAS)

When male spiders court females, they risk more than simple rejection. A hungry female who spurns the advances of a hopeful male may still see him as a likely candidate — for her dinner. And researchers recently discovered that for some male jumping spiders, the threat of being eaten is likely even higher.

Because some male jumping spiders can't easily distinguish between look-alike females of closely related species, they will vigorously dance and sing to impress any female they happen to come across.

Although that might improve their chances of successful mating, if a female happens to belong to another species — making her indifferent to males' amorous displays — the only response they're going to pique is her appetite, according to a new study. [Creepy, Crawly & Incredible: Photos of Spiders]

Researchers investigated the habits of four species of jumping spiders in the genus Habronattus, which live in overlapping habitats along a riverbed in the Rio Salado Habitat Restoration Area near Phoenix. Males in this genus — which includes about 100 species — are "highly ornamented," with colorful faces and legs, while females are much the same shade of light brown, with only subtle differences in the markings on their backs and faces, the study authors wrote.

The scientists observed the spiders' behavior in 15-minute intervals, tracking the tiny arachnids as they traveled from sunlight to shade, while also recording their courtship, copulation and — sometimes — cannibalism. Once the observations were done, the researchers captured the spiders and placed them temporarily in vials to confirm if the females were sexually mature.

Of the 42 spider interactions the study authors observed, 52 percent were between sexually mature males and females. The males performed mating dances or displays for the females every time they came into contact, whether their audience was the correct species or not, the researchers found. And 18 percent of those interactions ended with the male being attacked (and in one case, eaten), the scientists wrote in the study.

With male spiders being "pretty clueless" about finding their own species, their elaborate mating displays may have evolved over time as a defensive ploy, allowing them to keep a safe distance from potentially deadly encounters during courtship, study lead author Lisa Taylor, an assistant research scientist at the University of Florida's Institute of Food and Agricultural Sciences, said in a statement.

"This study provides some new insight into the age-old question of why males go to such ridiculous lengths to impress females," Taylor said.

The findings were published online April 5 in the open access journal PLOS ONE.