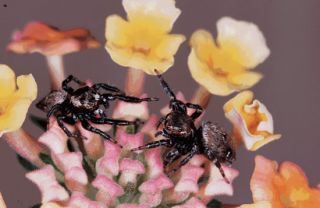 Female spiders often eat males before, during or after sex—hence the moniker "black widow." But with blood-drinking jumping spiders (Evarcha culicivora) of East Africa, males are more deadly to females than vice versa.

Now scientists have found that despite the risk of being cannibalistically devoured by their lovers, virgin female jumping spiders choose to get deflowered by bigger males. Later in life, they opt for smaller, safer males.

Past research showed that male jumping spiders seem especially cannibalistic toward smaller females. Adult females range from 4 to 7 millimeters in size—roughly the length of the average red ant—while males range from 3 to 6 millimeters. So while females are bigger on average, a male could still be up to 50 percent larger than a female.

To see if females chose to mate with dangerous larger males, spider biologist Simon Pollard at Canterbury Museum in Christchurch, New Zealand, and his colleagues investigated which spiders the female arachnids found attractive—with the help of plastic.

The researchers set up dead male spiders of varying sizes in lifelike postures and coated them with a clear plastic film to keep them in place. They next exposed these mounted spiders to the real thing.

Surprisingly, Pollard and his colleagues found virgin females preferred larger males as mates. Once females lost their virginity, however, they changed tack, fancying smaller males. The scientists found similar results when they paired live spiders up with each other, findings which are detailed in the September issue of the journal Ethology.

As to why virgin females take such a risk? In a sense, Pollard suspects they are gambling.

"It all comes down to probability," Pollard told LiveScience. "There are advantages for the females when mating with larger males—you'll probably have larger offspring that are fitter." The females are essentially placing a double-or-nothing bet—either they win big or they die trying.

After taking such a risk, however, Pollard suggests the females decide not to push their luck, aiming for the safer bet, "mating with smaller males to decrease their risk of getting eaten."

These findings "shed light on how complicated mating strategies can become," Pollard said.