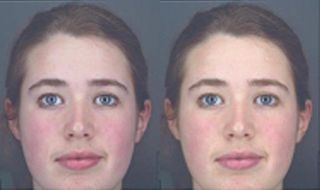 When it comes to an attractive face, color can make all the difference, suggests a new study.

The research focused on facial skin color among Caucasians, finding a light, yellowish complexion looks the healthiest. The skin color could indicate a healthy diet of fruits and vegetables, whose pigments are known to change the skin's hue, researchers suggest.

(The researchers predict the results would hold for other ethnicities as well.)

"Effectively health and attractiveness are pretty much the same thing," study researcher Ian Stephen of the University of Bristol in England told LiveScience. He added that past research as well as some of his forthcoming research shows as much.

Other studies have shown that shape and symmetry of a person's face are also cues of attractiveness.

"Most previous work on faces has focused on the shape of the face or the texture of the skin, but one of the most variable characteristics of the face is skin color," Stephen said.

Stephen and his colleagues asked 54 Caucasian participants to change the skin color of about 50 male and female faces on a computer screen to make them look as healthy as possible. Hands down, the participants tended to increase the rosiness, yellowness and brightness of the skin.

Here's how the researchers think the health-coloring connection works: The preference for more golden or yellow-toned skin could be related to the carotenoid pigments from fruits and veggies. These plant pigments are considered antioxidants, as they protect cells from damage caused by so-called free radicals and are also thought to be important for the immune system.

As for skin color, Stephen notes that if someone were to eat just carrots for a stint, the person's skin color would certainly turn orange-ish. He doesn't recommend such a diet, of course.

And rosy coloring can be the result of skin flushed with blood and oxygen, suggesting a strong heart and lungs, the researchers say. For instance, smokers and diabetics and those with heart disease have fewer blood vessels in their skin, and so their skin would appear less rosy.

If you think you can ditch the rabbit-like meals and just head to a tanning bed, think again. The researchers found lighter skin was better.

"In the West we often think that sun tanning is the best way to improve the color of your skin," Stephen said. "But our research suggests that living a healthy lifestyle with a good diet might actually be better."

Another tip: Eating only fruits and veggies won't work either, so forget about nibbling your way to an attractive face.

"If you're starving yourself then you'll look unhealthy for other reasons," Stephen said. "I wouldn't suggest you eat nothing but salads, because you won't be getting enough calories and [would] lose a lot of weight, and that in itself doesn't look good. If you end up anemic you won't have the red component in your face."

The results would likely hold for other ethnicities as well, Stephen said. For instance, his past research has shown black South Africans tend to judge rosier faces as healthier. And forthcoming research suggests the same may hold for yellowness and lightness of facial skin.

The study, which will be published in the December issue of the International Journal of Primatology, was funded by the UK Biotechnology and Biological Sciences Research Council, the Economic and Social Research Council, and Unilever Research.