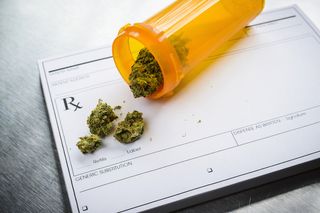 A compound in marijuana called cannabidiol could help treat people who have anxiety disorders, a new review of previous research suggests.

Cannabidiol could be used in addition to talk therapy to treat anxiety disorders such as phobias and post-traumatic stress disorder (PTSD), the review concluded. However, most of the studies examining whether the compound works as a treatment for anxiety have been conducted in animals, the researchers said. So more research is needed to see how well the compound might work in people with anxiety disorders, the researchers said.

A key part of anxiety is fear, and the few human studies that have been conducted on cannabidiol have suggested that the compound dampens people's fear by changing the activity of certain brain regions, said Carl Stevenson, a co-author of the new review and a neuroscientist at the University of Nottingham in the United Kingdom. [Marijuana Could Treat These 5 Conditions]

In the review, the researchers looked at previous studies that had examined the use of cannabidiol, also called CBD, which is a marijuana compound that does not give users a high. In some of the studies, researchers had exposed rodents to threatening stimuli to induce anxiety in the animals. The authors of those studies found that giving the rodents cannabidiol seemed to decrease the degree of anxiety the animals experienced.

Similar effects have since been shown in studies that involved healthy people and studies that involved people with anxiety disorders, according to the review, published March 9 in the British Journal of Pharmacology. In one small study of 40 people, published in 1993 in the Journal of Psychopharmacology, researchers found that cannabidiol reduced anxiety when the people who took it were subjected to a stressful situation. In addition, in a study of 24 people who all had social phobia, researchers found that cannabidiol helped to reduce anxiety triggered by a public speaking task, according to those findings, published in 2011 in the journal Neuropsychopharmacology.

More research is needed to look at the exact mechanisms by which cannabidiol may work to treat people with anxiety. But some brain-imaging studies in humans have suggested that the compound helps regulate the activity of parts of the brain that are involved in negative emotions, including fear, Stevenson said.

Medications currently used to treat people with anxiety have problems Stevenson said, as these drugs do not work for every patient and can take a while to kick in. Moreover, people who take such medications often experience side effects, he noted. (These effects may include drowsiness, weight gain or sexual dysfunction.)

In comparison, previous research into the use of cannabidiol for disorders such as epilepsy has shown that the substance does not tend to have significant side effects, Stevenson told Live Science.