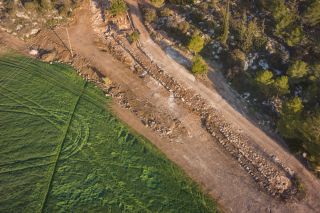 Rome built roads, such as this one, to help its military to swiftly patrol the empire. These roads also facilitated trade.
(Image: © Griffin Aerial Photography Company; Courtesy of the Israel Antiquities Authority)

About 2,000 years ago, travelers walked along a wide, stone-paved road, some of them accidently dropping coins that would later be found by modern-day archaeologists in Israel.

That road, as well as the coins lost by ancient passersby, was discovered by archaeologists near Highway 375 in Israel in February, according to the Israel Antiquities Authority (IAA).

"The road that we discovered, which 2,000 years ago passed along a route similar to Highway 375 today, was up to 6 meters [20 feet] wide, [and] continued for a distance of approximately 1.5 kilometers [1 mile]," Irina Zilberbod, director of the IAA excavation, said in a statement. "[It] was apparently meant to link the Roman settlement that existed in the vicinity of Beit Natif with the main highway known as the 'Emperor's Road.'" [See Photos of the Ancient, Roman-Era Road and Coins]

Archaeologists found the road during a routine survey prior to a construction project by the Mei Shemesh company — the laying of a water pipeline to Jerusalem, the nation's capital.

The Emperor's Road was the main artery connecting the large settlements of Eleutheropolis (also called Beit Guvrin) and Jerusalem, Zilberbod said. "The construction of the Emperor's Road is thought to have taken place at the time of Emperor Hadrian's visit to the country, circa 130 C.E., or slightly thereafter, during the suppression of the Bar Kokhba revolt in 132 [C.E. to] 135 C.E." (Beit Guvrin was located nearby, and along the same road as, Beit Natif.)

This idea is backed by earlier evidence: Researchers found a milestone (a stone that marks distances) near the road with the name of Emperor Hadrian, she said.

During the recent excavation, researchers found four coins embedded in the dirtbetween the road's stones. These findings included a coin from the second year of the Great Revolt (A.D. 67); a coin of Pontius Pilate, the prefect of Judea, dating to A.D. 29; a coin of Agrippa I that was minted in Jerusalem in A.D. 41; and a coin from an Arab caliphate known as the Umayyad dynasty (A.D. 661 to 750).

Before the Romans arrived in Israel, most of the roads in the region were more akin to improvised trails. But once the Romans took charge, they built an international road network in the area, largely to accommodate their military campaigns, the researchers said.

Roman government leaders realized that roads helped them run and connect the empire, the IAA said. Main roads, including the Emperor's Road, branched off into secondary routes that led to agricultural settlements. The people who harvested grain and prepared oil and wine in these settlements used the roads to help them transport their goods to nearby villages and large, faraway markets.

"The ancient road passed close to the Israel National Trail, and we believe that it will spark interest among the hikers," Amit Shadman, the IAA district archaeologist for Judah, said in the statement. "The Israel Antiquities Authority and Mei Shemesh Corporation have agreed that the road will be conserved in situ [in its natural condition], for the public's benefit."