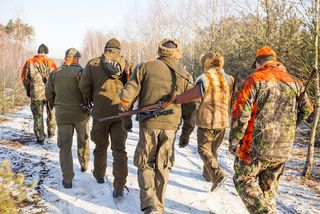 Lead bullets are deadly, and not just for the wild game that get shot. That's why a recent decision to overturn a federal ban on the use of lead bullets within U.S. wildlife refuges may backfire regarding the health of both animals and people, especially children, an expert told Live Science.

On his first day in office (March 2), U.S. Interior Secretary Ryan Zinke signed a federal order repealing a policy that banned the use of lead bullets and fishing tackle within wildlife refuges. The policy itself was a new one: Daniel Ashe, the former director of the U.S. Fish and Wildlife Service, approved it on Jan. 19, with the goal of phasing out the use of lead bullets and lead fishing tackle in wildlife refuges by January 2022.

The recent repeal of this policy does not address the problems of lead poisoning, said Andrew Wetzler, the deputy chief program officer at the Natural Resources Defense Council in Chicago. [Top 5 Ways to Reduce Toxins in Homes]

"There's a very well-documented association between using lead ammunition and birds and other animals being poisoned by lead," Wetzler told Live Science.

This poisoning is usually secondary, happening when other animals eat lead-contaminated meat. For instance, after shooting game, hunters usually dress it in the field. This involves removing the entrails to prevent gut bacteria from growing and degrading the carcass. However, lead bullets usually fragment into particles, meaning that if the hunter used a lead bullet, some of the lead may end up in the entrails, which sometimes get left behind for other animals to consume, he said.

Or, a shot animal can escape capture, only to die in the wild with the lead bullet inside it, Wetzler said.

Scavengers, including vultures, eagles, bears and foxes, may eat the meat from the dead animal's remains or discarded entrails and then get lead poisoning, Wetzler said.

Lead poisoning from bullets has been documented in myriad animals, including the critically endangered California condor (Gymnogyps californianus) and, according to a 2009 study in the journal Biological Diversity, grizzly bears (Ursus arctos horribilis) in Yellowstone.

Moreover, lead poisoning can also affect people, including people who eat game shot with lead bullets. In children, lead exposure can lead to increased behavioral problems, delayed puberty and problems with growth, hearing and cognitive performance, according to the National Institutes of Health (NIH). In adults, lead exposure is associated with increased blood pressure and hypertension, as well as decreased kidney function and tremors, the NIH said.

"There is no safe level of lead for humans," Wetzler said. "Animals are no different. Some animals are more tolerant of lead poisoning than others, but it's never good for you and it can kill you. And if it doesn't kill you, it can cause reproductive effects, decline of IQ and other kinds of nastiness."

In lieu of using lead bullets, gun owners can buy "green" bullets that are made out of nontoxic metals, particularly copper alloys, Wetzler said. These copper bullets cost about $15 more per box than regular lead bullets, he said.

"A deer hunter won't go [through] more than a box of ammunition in a season," Wetzler said. "Given the amount of money people spend to hunt and fish, it's basically negligibly more expensive." [Gallery: First Red List of Endangered Ecosystems]

He noted that hunters who change ammunition type generally have to reset their guns, taking them to the shooting range to adjust the sites so that the guns will shoot straight. However, hunters generally do that every season anyway, Wetzler said.

In the repeal, Zinke wrote that the policy "was issued without significant communication, consultation or coordination with affected stakeholders," according to The Hill.

However, the topic of lead bullets isn't a new one. A coalition of environmental groups petitioned the federal government to ban them in 2014; California lawmakers approved a law in 2013 to phase them out; and federal law prohibits the use of lead ammunition for water fowl hunting, Wetzler said.

"We've taken lead out of paint, out of gasoline and we're trying to get it out of our water," he said. "But one place where we feel free to take these big droplets of lead and just scatter them throughout the landscape is when it comes to ammunition."