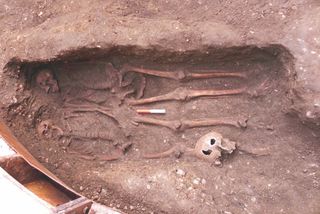 The skeletons of two men were found buried in a double grave in London, their fingers entwined.
(Image: © © Crossrail)

A 600-year-old mystery has surfaced from the tunnels of London's new Crossrail network, as archaeologists unearthed the skeletons of two men who were buried apparently holding hands.

Interred in a double grave, their heads both turned to the right and their fingers entwined, the two men stand out from the array of unusual finds uncovered since the Crossrail project began in 2009 to build a 26-mile (42 kilometers) rail line from West to East London. [The 25 Most Mysterious Archaeological Finds on Earth]

Why were the men holding hands?

The discovery, revealed at a new exhibit on the Crossrail findings, has indeed puzzled archaeologists at the Museum of London Archaeology, who carried out the excavation. They have suggested the men may have been related in some way, by blood or romance.

Excavated from a cemetery near London's Smithfield meat market, which housed more than 50,000 corpses, the pair rested in the third and final layer of graves dating to the early 15th century.

An examination of the bones suggested that one man was between 36 and 45 years old when he died, and the other at least 46 years old at his death.

DNA tests on 12 of the 25 skeletons excavated from the cemetery revealed that fourwere positive for the bacteria Yersinia pestis, which causes the plague. The male hand-holders have yet to undergo DNA testing for the bacteria.

"This confirmed that the cemetery was used for the burial of Black Death victims," Don Walker, senior human osteologist at the Museum of London Archaeology, told Live Science.

"The results suggest that a high proportion of the burials may have had plague," Walker said.

They would have been infected during one of the bubonic plague epidemics that swept London in the years after the first, most deadly, outbreak in 1348, which wiped out more than half of the city's inhabitants.

Examination of the bones revealed that both individuals had tooth disease, probably caused in part by poor dental hygiene, and arthritis of the spine, often caused by heavy lifting or laboring.

"One also had a distinctive 'parry' fracture of the forearm. This was the most common long bone fracture in medieval London and may be caused by excess stress through activity or by the defensive action of parrying a blow aimed at the head," Walker said.

Who were these men?

Why the men have been holding hands for centuries remains a mystery.

"It was quite common for family members to be buried together if they died at or around the same time," Walker said. "They may have been brothers or had some other connection. Until DNA testing is done, we cannot be sure."

Another, less romantic, scenario is that the hands moved during the deterioration of the bodies.

"As the bodies were lying side-by-side, the hands may well have been close already," Walker said.

He noted the men may have been buried in shrouds, and the deterioration of the cloth holding the limbs close to the body could have allowed the arms to move.

"For example, the arms could have fallen off the hip onto the grave floor," Walker said.

During the Crossrail project, more than 200 archaeologists have managed to take an unprecedented slice down through London, unearthing more than 10,000 objects from 40 locations.

A wide range of the unearthed artifacts and fossils are on display in a new exhibition at the Museum of London Docklands until September 2017.