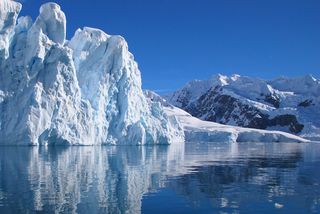 Temperatures on the Antarctic continent reached a record-breaking high of 63.5 degrees Fahrenheit (17.5 degrees Celsius) in 2015, according to a new report of balmy records for the bottom of the world.

And things got even toastier back on Jan. 30, 1982, when the thermometer peaked at 67.6 degrees F (19.8 degrees C) at Signy Research Station on Antarctica's Signy Island, according to the World Meteorological Organization (WMO), a division of the United Nations. This temperature was the highest on record for the Antarctic region, an area including all land and ice south of 60 degrees south latitude, the WMO said.

When WMO experts looked at just the continent itself (the area including the continent and its nearby islands), they found that the warmest temperature — a positively balmy 63.5 degrees F — happened on March 24, 2015, at the Argentine Esperanza Base research station, located by the northern tip of the Antarctic Peninsula. [Images of Melt: Earth's Vanishing Ice]

The highest temperature for the Antarctic Plateau (an area with an elevation of 8,200 feet, or 2,500 meters) reached 19.4 degrees F (minus 7 degrees C) at the Automatic Weather Station on the Adélie Coast on Dec. 28, 1980, the report found.

These high temperatures are a large departure from the continent's lowest recorded temperature of minus 128.6 degrees F (minus 89.2 degrees C) at Vostok Station on July 21, 1983, the WMO said.

The WMO published the report online today (March 1) in a continuing effort to expand its worldwide database on extreme weather and climate conditions, the organization said. The database will help the WMO learn about naturally occurring climate change, as well as human-induced climate change along global and regional levels, WMO officials said.

Moreover, Antarctica's ice sheet contains 90 percent of the world's freshwater, and if the ice sheet were to melt, it would raise sea level by about 200 feet (60 m). That's disconcerting, given that the Antarctic Peninsula is one of the fastest-warming regions of the planet, having warmed by almost 5.4 degrees F (3 degrees C) over the past 50 years, the WMO said.

In addition, about 87 percent of glaciers along the Antarctic Peninsula's west coast have retreated over the past 50 years, especially in the past 12 years, the WMO added.

The warming can be felt even during short visits down south, said Jamin Greenbaum, a postdoctoral research fellow at the University of Texas Institute for Geophysics, who was not involved in the new report.

"I just returned from Antarctica a few weeks ago, where I saw, firsthand, how warm it was there," Greenbaum told Live Science. "It was my 10th consecutive fieldwork experience down there, and I've never seen so much surface meltwater — it was remarkable."

Meltwater is the result of high temperatures that can melt the surface of the ice and snow, Greenbaum said. Meltwater is fairly alarming, he said, because it can lead to the rapid retreat of coastal ice, as well as sea-level rise.

"There was so much [meltwater] that even a large section of the snow road we take every day collapsed, forcing us to use helicopters to commute between the research station and the airfield," Greenbaum said. [In Photos: Huge Icebergs Break Off Antarctica]

Another Antarctic expert, Eric Steig, said that "these temperatures are very likely associated with the extremely strong sea ice loss." But the origin of that loss "is actually unclear at the moment," said Steig, an adjunct professor of Earth and space sciences at the University of Washington, who was not involved in the report.

The new report may help scientists figure out what's behind these high temperatures. For instance, the WMO's Commission for Climatology international evaluation committee found that the records at all three stations took place during an influx of warm air.

The WMO scientists and their colleagues hope to learn more, and they aim to increase weather forecasting capability during the Year of Polar Prediction project, which will last from mid-2017 to mid-2019, the WMO said.