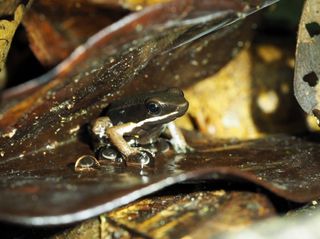 Now that's an unreliable babysitter: Male poison frogs (Allobates femoralis) take care of egg clutches, even those that aren't theirs, in their own territories. But if these frogs move into a new territory, watch out: They eat every egg in sight.

A team of researchers, led by Eva Maria Ringler of the University of Veterinary Medicine Vienna, noticed this cannibalistic frog behavior in the wild and decided to find out how male poison frogs decide whether to play good dad or vicious killer.

"We have seen in poison frogs that a simple trigger is sufficient to switch from very destructive actions to parental care," Ringler said in a statement. [The Animal Kingdom's Most Devoted Dads]

Eating other animals' offspring is a way to ensure that an animal's own genes have a better shot at being passed on. For example, chimpanzee males have been known to attack and eat infants, and male cardinalfish (Apogon niger) sometimes swallow their own egg broods (which they shelter in their mouths) if the chances of finding another mate are high enough. Some species, including lions, practice infanticide as a matter of course; females are more likely to mate again if their offspring are dead. (However, cannibalism is not always part of this infanticide for mating purposes.)

Allobates femoralis — sometimes known by its French name, epipedobate fémoral — lives in forested areas of Guyana, Suriname, French Guiana, Colombia, Ecuador, Peru, Bolivia and Brazil, according to the International Union for Conservation of Nature. These frogs lay their eggs on dead leaves on the forest floor and then carry freshly hatched tadpoles to puddles and pools to develop.

Inside a male frog's territory, he will defend and transport any egg clutch, even if he hasn't mated in weeks. Ringler and her colleagues tested this generous behavior in a laboratory setting by putting unrelated egg clutches in the tanks of male frogs. As long as the eggs were in the male's personal space, he would care for them as if they were his own, the researchers found.

In these scenarios, frog cannibalism may result from power struggles, the researchers said.

"In the species' natural habitat, there are regular fights for territories and also territory takeovers," Ringler said. "We expect that cannibalism commonly occurs in such situations." Once all the eggs are gone, the loser male is probably less likely to fight to regain his territory, Ringler added.

The frog-eat-frog world is reminiscent of the world of the HBO series "Game of Thrones," in which there have been several instances of illegitimate babies being murdered to prevent them from ever threatening an adult's claim to the throne.

The infanticide-committing frogs probably get another advantage from eating the eggs of rivals, though: Eggs are rich in nutrients, and eating them probably contributes to the adult frogs' later survival and mating success, the researchers wrote.

The findings are detailed today (Feb. 28) in the journal Scientific Reports.