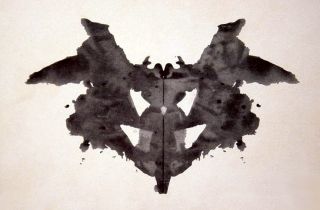 What do you see when you look at this inkblot, part of the Rorschach test?
(Image: © Public Domain)

Whether you see a butterfly, dancing elephants, bloody humans or some other imagery when peering at one of the abstract blobs that makes up the Rorschach inkblot test, your answers can divulge some of the darkest, or just hidden, corners of your mind.

And now, scientists have figured out why people see so many images when looking at the inkblots: The number of images elicited by these inkblots is determined by the irregular shapes at the edges of each. The researchers specifically looked at fractals, or repeating patterns that can be seen at all scales (close-up and farther away). When the fractals are more complex, people see fewer images than when such patterns are simpler.

"These fractals are inducing these images that aren't there. They're kind of fooling the visual system," said lead study author Richard Taylor, a physicist at the University of Oregon.

The brain's visual system is adapted to process patterns, Taylor told Live Science. In nature, fractals are abundant, and can be found in trees, clouds, lightning and coastlines, he said. The visual system's ability to efficiently process such fractals results in what Taylor calls "effortless looking."

Taylor and his team decided to use Rorschach inkblots to study this image processing, given the inkblots' inclusion of fractal patterns, he told Live Science. The inkblots were first produced in 1921 by Swiss psychiatrist Hermann Rorschach, who published 10 different patterns that were then promoted as a "psychological X-ray," according to the study. The test relies on a phenomenon called pareidolia, in which people see familiar images where none actually exist (seeing a face in the clouds, or on Mars, for example). Rorschach would use his patients' interpretations of each blot to help him evaluate their mental state. [Seeing Things On Mars: A History of Martian Illusions]

The researchers had 23 first-year psychology students look at 24 different Rorschach inkblot images and determine how many shapes they could see in each image, from "none" to "seven or more." By using an artificial parameter called fractal dimension, the researchers were able to quantify how complex the fractals were in each inkblot. After analyzing their results, the researchers found that the more complex the fractals were, the fewer images the participants saw in each.

The researchers found similar results when they looked at data sets from two past studies: an analysis conducted in the 1930s by psychologist Marguerite Hertz of responses from 1,050 participants to the Rorschach blots; and a study in 1953 of Rorschach inkblots that involved people with and without schizophrenia.

Taylor hopes to apply the findings toward the development of artificial visual systems.

Currently, Taylor's research on artificial eyes is in the in vivo stage, meaning his team is about to implant prototypes of the eyes into mice, he said. He and his team have already completed in vitro (petri dish) studies on the concept.

Taylor noted that his team still has more research to perform before testing the artificial eyes in human patients, a move that is still about 10 to 15 years out, he said.

The study was detailed online Feb. 14 in the open-access journal PLOS ONE.