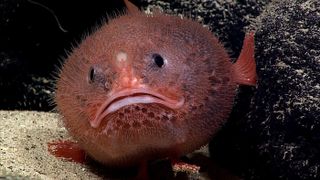 A sea toad, which is a fish that can "walk," waits for its next meal to swim by.
(Image: © Courtesy of the NOAA Office of Ocean Exploration and Research, Deepwater Wonders of Wake)

Armchair oceanographers, take note: This week, the research ship Okeanos Explorer will send a remotely operated vehicle into the depths of the Pacific Ocean, seeking out exotic sea animals like the "walking" fish called a sea toad and other curiosities. And, you can have a front-row seat.

The ROV, called Deep Discoverer, will reach depths of 3.7 miles (6,000 meters) beneath the sea's surface. Its trip is scheduled to begin Thursday (Feb. 16), and you can watch it unfold online.

This expedition, which will run through September, is part of NOAA's CAPSTONE, or Campaign to Address Pacific monument Science, Technology, and Ocean Needs. The project, in its third and final year, is aimed at collecting data from the deep ocean within marine-protected areas in the central and western Pacific Ocean, according to NOAA. The information will not only shed light on largely unexplored areas; it will also help others to make informed decisions regarding management of the protected areas and on the issue of deep-sea mining. [See Photos of the Ocean's Freakiest-Looking Fish]

"With each expedition we not only provide scientists and decision makers with the necessary data to conduct their work, but also reach new audiences who are fascinated by what we are seeing in the deep ocean," Alan Leonardi, director of NOAA's Office of Ocean Exploration and Research, said in a statement. "This public engagement improves science literacy and fosters an interest in the sciences among young people — perhaps leading to the next generation of ocean explorers."

If this expedition is anything like the others in years past, as you watch online, be prepared to see organisms you've never seen before.

For instance, during an ROV dive in the Mariana Trench, east of the Mariana Islands near Guam in the western Pacific Ocean, scientists observed a stunning jellyfish, whose flying-saucer-like bell and wiry tentacles looked more "outer space" than "deep sea." The jellyfish turned out to be a new species.