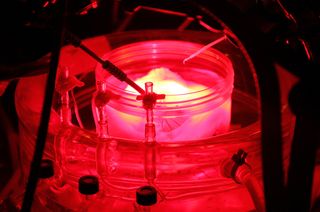 In a pioneering study, researchers are reviving donated hearts for up to 12 hours to find sources of irregular beats.

As resuscitated tissue thumps away in dishes in a laboratory, a quartet of high-speed cameras captures 40,000 recordings of the hearts' electrical activity. The cameras track electrical impulses to identify sources of signal disruptions that can make hearts beat too slowly, too quickly, or out of rhythm.

By visualizing the reanimated hearts with more images and at a much higher resolution than is possible in living patients, scientists could build 3D models and highly detailed heart maps that can help medical professionals design more targeted treatments for heartbeat irregularities. [Donated Hearts Beat Again in the Lab | Video]

In a healthy heart, electricity generated by special cardiac tissue called the sinoatrial node produces contractions that cause a steady beat — about 60 to 100 beats per minute when at rest, according to the Mayo Clinic. The rhythm is set by synchronized pumping in the heart's two upper chambers, called the atria, and in its two lower chambers, called the ventricles.

Disruptions in the heart's electrical system can cause abnormal beating, or arrhythmia. When erratic signals affect the atria, they create a type of arrhythmia known as atrial fibrillation (AF). This is the most common form of arrhythmia, and it can lead to stroke or heart failure, study co-author Vadim Fedorov, an associate professor in the Department of Physiology and Cell Biology at the Ohio State University (OSU), told Live Science.

Surgeons treat AF with a technique called ablation — once they have a general idea of where the chaotic electrical activity is coming from, they place electrodes inside the heart and deliver targeted electrical pulses that scar the disruptive region and terminate the wayward signal.

But a doctor's view of the energy pulsing through a living patient's heart is limited, as clinical-imaging technology can capture only 200 recordings of the heart from one side at a time, Fedorov said. Consequently, ablation can miss its target; it succeeds about 70 percent of the time and often requires repeat treatments, OSU representatives said in a statement.

However, Fedorov and his colleagues have developed a groundbreaking technique that generates 40,000 high-resolution images of heart atria in 3D, in a laboratory setting. It offers a more accurate perspective on heart structure and electrical activity — and may provide cardiac surgeons with a better chance at intercepting dodgy signals. [Heart Disease: Types, Prevention & Treatments]

Over the past four years, Fedorov and his colleagues at OSU have analyzed over 100 hearts — "all alive" — he told Live Science. These "living" hearts frequently come to the lab at OSU's Wexler Medical Center directly from the operating room, donated by heart transplant patients and Lifeline of Ohio, a nonprofit that coordinates human organ donations.

To resuscitate the hearts, Fedorov first closes up the tiny blood vessels inside them, then places the hearts in an oxygenated solution at 98.6 degrees Fahrenheit (37 degrees Celsius). Special tubes inserted in the coronary arteries suffuse the heart with warm, oxygenated solution that simulates flowing blood, allowing it to beat again.

The heart is then stained in a special bath, injected with fluorescent dye that detects electrical signals, and surrounded by four infrared cameras. Infrared light penetrates to a depth of 0.4 inches (1 centimeter) inside the heart tissue, allowing the researchers to see electrical activity in both sides of the atria and to visualize it in 3D. This enables them to pinpoint irregular signals with a high level of accuracy.

Heart models assembled from the images revealed sources for AF — regions in the atria "like little tornados inside the heart" that sustain the electrical activity behind irregular beating, Fedorov said.

"When we have 3D imaging, we can see a more precise source of electrical activity. And when we apply a few ablation lesions, we can terminate atrial fibrillation," he explained.

So we beat on

Even though that level of visualization is not yet possible for hearts still inside living patients, this research is already changing how clinicians perceive and map AF, according to study co-author Dr. John Hummel, an electrophysiologist at OSU's Wexner Medical Center.

"Because we're not to the point where we can ablate based on the high-resolution mapping done in the lab, we're working it backwards, to verify if the mapping matches where we have successfully ablated," Hummel said in a statement.

Confirming that the 3D heart maps can direct surgeons to shut down the correct electrical signals in faulty hearts could lead to more successful strategies for targeting arrhythmia, Federov told Live Science.

"We are looking at how we can translate ex vivo ['out of the living'] to in vivo [occurring in a living organism] and for that, we need to have clinical trials to confirm our observations," he said. "We have to go between clinics and ex vivo research to finally develop very patient-specific treatment against atrial fibrillation."