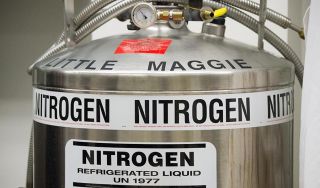 A sheriff's deputy in Augusta, Georgia, recently died after inhaling liquid nitrogen while trying to save an employee inside a sperm bank.

Sgt. Greg Meagher, 57, died Feb. 5 and several other officers from the Richmond County Sheriff's Department were injured, the Augusta Chronicle reported. Two liquid nitrogen tanks, which are used to preserve sperm samples, were somehow opened in the sperm bank. The injured deputies were treated for shortness of breath and released, according to news reports.

But why is inhaling liquid nitrogen so deadly, given that nearly 80 percent of the air people breathe is made up of nitrogen? [The 27 Oddest Medical Cases]

It turns out that the liquid nitrogen's danger lies in its rapid transformation into a gas, which can cause asphyxiation, said Peter Barham, a physicist at the H H Wills Physics Laboratory in Bristol, England, and author of "The Science of Cooking" (Springer, 2001).

"I assume from the brief facts in the article that the officer was suffocated," Barham told Live Science.

Nitrogen is typically a gas at room temperature, and transforms into its liquid state at minus 321 degrees Fahrenheit (minus 196 degrees Celsius). Directly submerging a limb or a finger in liquid nitrogen is dangerous because it can freeze tissue almost instantaneously. (It's theoretically possible to quickly submerge a hand without any damage, thanks to the Leidenfrost effect, where a protective gas barrier forms around the object, preventing heat transfer, but please do NOT try that at home.) Liquid nitrogen's properties are useful in multiple medical procedures, such as wart removal, as well as in sperm and egg preservation.

Liquid nitrogen’s primary danger, however, is that it doesn't remain a liquid for long once it is exposed to ambient temperatures.

"If there is a spill of liquid nitrogen in a confined space then, as it evaporates to nitrogen gas, the gas (which occupies about 700 times the volume of the liquid) will expand to occupy the room," Barham said.

It then displaces all the oxygen in the room, he said. People need to breathe oxygen to live, but because about 78 percent of the air humans breathe is nitrogen anyway, most people don't notice it until they pass out, Barham added.

"If not rescued within a few minutes, then death from suffocation is inevitable," Barham said.

There are strict guidelines for the handling of liquid nitrogen, but not everyone follows them.

"There are typically several cases around the world each year of laboratory technicians dying this way — almost always because they fail to follow the safety regulations," Barham said.

One common scenario is that technicians are transporting nitrogen in an elevator gets stuck, and as the liquid nitrogen evaporates, it slowly replaces the air in the elevator, Barham added.