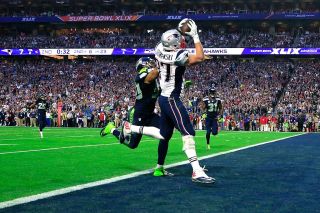 Rob Gronkowski of the New England Patriots catches a touchdown pass on a natural-grass turf against K.J. Wright of the Seattle Seahawks during the Super Bowl on Feb. 1, 2015 in Glendale, Arizona.
(Image: © Rob Carr/Getty Images)

This Sunday, the New England Patriots and the Atlanta Falcons will face off in the Super Bowl, battling for the championship on a turf field at Houston's NRG Stadium. Does the field's surface type — grass or turf — affect players' injury rates?

One of the benefits of artificial turf is that the surface is more uniform — free of things like potholes, said Brian Dorfman, a kinesiologist who owns an injury rehabilitation practice in California and works with both professional and Olympic athletes.

"Generally, the issues with grass surfaces are that they are not a perfect surface," Dorfman told Live Science. [5 Ways Science Could Make Football Safer]

However, if a grass field is smooth and lacks uneven bumps, then it may actually be safer for athletes, Dorfman said. That’s because grass is "a pretty forgiving surface," he added.

A few different studies have looked into the injury rates of athletes playing on grass and turf surfaces, and generally have found that neither surface leads to significantly more injuries than the other.

For instance, one study, published in the British Journal of Sports Medicine in 2006, found that, for 10 elite European soccer teams, the number of injuries during both training and games did not differ based on whether the athletes played on grass or turf.

Another study, published in 2007, also in the British Journal of Sports Medicine, looked at injury rates of 2,020 female soccer players over the course of one season, and found that injury rates on both artificial turf and grass were relatively similar.

This may be because turf surfaces are stiffer than grass surfaces, which can affect impact forces on the body's bones, muscles, tendons and ligaments, according to the 2007 study. Similarly, the friction between shoes and surfaces is higher on turf than on grass surfaces, which can affect rates of ankle and knee injuries, the authors of the study said.

Dorfman agrees, noting that ankle, knee and head injuries can be exacerbated on turf, which is a harder surface than grass. Turf also "tends to be a little sticky, so you can't get the natural slide," Dorfman said. This could affect ankle, toe and knee joints, he added. Finally, athletes who compete and train on turf are likely to experience soreness in their legs and lower back, given the harder surface, he said.

Numerous other factors, however, are likely to play just as great or even greater a role in injuries, including weather conditions, quality of the surface (whether it's grass or turf), an athlete's fitness level and impacts between players, the 2007 study noted.

Ultimately, Dorfman said, risk of injury doesn't just come down to surface type, but also biomechanics: The greatest athletes know how to move their bodies in the most efficient, safest way possible, properly aligning their bones and muscles and reducing the risk of injury.

"If I could change one thing to make less injuries, biomechanics would make a bigger change than the turf," he said.