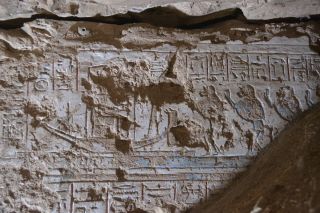 On one of the walls of the entrance to the 3,000-year-old tomb of a royal scribe is a carving depicting four baboons praising the sun god Ra.
(Image: © Waseda University)

Archaeologists say they've discovered the 3,000-year-old tomb of a royal Egyptian scribe in the vast necropolis at ancient Thebes.

Richly decorated with images of gods, baboons and mortals alike, the burial chamber dates back to the Ramesside period, around 1200 B.C.

The ruins of Thebes — in modern-day Luxor — span both banks of the Nile River in Upper Egypt. The east side was the domain of the living, home to the city proper and sprawling temple complexes like Karnak. The west side, meanwhile, was mostly reserved for the dead, with a necropolis that included the Valley of the Kings, where royal Egyptians were buried during the New Kingdom (1550–1070 B.C.). [5 Big Archaeology Stories to Watch for in 2017]

More modern development has obscured parts of the necropolis, but a few years ago, Egyptian authorities relocated people from the towns of Sheikh Abd el Qurna and el Khokha so that they could demolish houses and explore the tombs underneath.

A team of archaeologists led by Jiro Kondo of Waseda University in Japan had been cleaning debris out of part of the tomb of Userhat (labeled TT 47) in the el Khokha area of the necropolis. Userhat was an Egyptian official who served Amenhotep III, King Tut's grandfather, with the title of "overseer of the king's private apartment."

Kondo and his colleagues found a hole in the forecourt of Userhat's tomb. They investigated the hole and found that it led to a never-before-seen tomb.

Inscriptions inside the newly discovered T-shaped chamber indicate that the tomb was built for a man named Khonsu, a "true renowned scribe," according to a statement from Waseda University.

One wall of the tomb's entrance has a carving depicting four baboons praising the sun god Ra. Another wall features a painting of Khonsu and his wife worshipping the gods Osiris and Isis, with two ram-headed deities, likely Khnum or Khnum-Re, the researchers said. Osiris and Isis appear again —though this time, in a seated pose —in another wall carving. The ceiling is also colorfully painted with geometric patterns, some that look like checkerboards.

Right now, the tomb's inner chamber is blocked by piles of stones, but Kondo and his colleagues say they hope to find more wall decorations once they are able to venture inside.