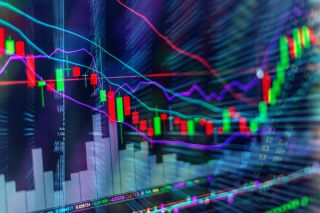 Ever since the end of World War II, some bright minds have been using math and physics to make predictions about changes in the stock market. Building on the models that have been developed by these quantitative analysts — who are called quants — scientists are opening new windows into the world's financial institutions.

Tonight (Feb. 1), University of California, Irvine, professor James Weatherall will talk about this history and how physics and math play a role in predicting today's stock market. You can listen to his live webcast tonight at 7 p.m. ET on Live Science. His public talk will take place in Ontario at the Perimeter Institute for Theoretical Physics.

"The first person primarily trained as a physicist to apply methods from physics in finance was probably Louis Bachelier, who in 1900 described connections between the probabilities associated with changes in stock prices and the heat equation, which describes how heat spreads, or diffuses, over time," Weatherall told Live Science. Weatherall added that in 1959, another physicist, M.F.M. Osborne, built on Bachelier's idea, "arguing that percentage changes in stock price are analogous to the 'jitters' of a particle of pollen suspended in what is being buffeted from all sides by smaller particles [analogous to bits of information related to a stock] — a process known as Brownian motion." [The 9 Biggest Unsolved Mysteries in Physics]

A mathematician named Ed Thorp later adapted these ideas and started the first so-called quantitative hedge fund in 1969. The formulas he used for pricing the funds were based on Osborne's statistical work, Weatherall said.

These historical ideas "form the backbone of much modern risk analysis" in markets, he said.

Even so, there continue to be advances in the field of quantitative analysis. For instance, physical systems can reach critical points where, say, a gas cannot be liquefied or when a solid changes phases into another state of matter. This same idea can be applied to the stock market.

The physics of so-called critical phenomena refers to "situations in which qualitative shifts in the behavior of a system occur as a result of long-range correlations," Weatherall said. "Examples include things like avalanches, earthquakes and some phase transitions."

Over the last two decades, he said, several physicists have argued that stock market crashes are another type of critical phenomenon.

"This idea is very important, because it suggests that market crashes should not be viewed as 'caused' by individual events, but rather occur as a consequence of the large-scale structure of the market at the time," Weatherall said.

During his talk, Weatherall will also point out the limitations of using physics and mathematical models to understand a financial system. For one, he said, models are always based on at least a few assumptions, and when the assumptions aren't valid, the predictions made by the models fail as well.

"This means that it is particularly important to be attentive to what various models assume about market conditions," Weatherall said.