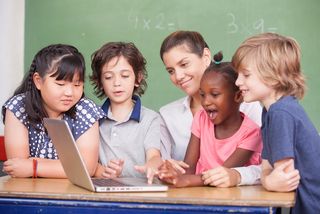 Kids who think they can get smarter if they work hard are more likely to bounce back from their mistakes than those who think their level of intelligence is set in stone, a new study finds.

"The main implication here is that we should pay close attention to our mistakes and use them as opportunities to learn," rather than glossing over mistakes, study researcher Hans Schroder, a doctoral student in psychology at Michigan State University, said in a statement.

In the study, the researchers first interviewed 123 children (average age of 7) to determine whether they had a growth mindset or a fixed mindset. The children were asked questions such as "imagine a kid who thinks that you can get smarter and smarter all the time…how much do you agree with this kid?"

Then, the researchers monitored the children's brain waves while the kids performed a task on a computer, which involved pressing the spacebar when they saw certain images.

The researchers analyzed the brain responses that occurred within half a second of the children making a mistake on the task. In general, a bigger brain response means that a person is paying more attention to her or his mistake, the researchers said.

The study also found that children with a fixed mind-set could still improve their accuracy on the task, but only if they paid close attention to their mistakes.

The findings may have some practical implications for parents and teachers.

"It is a seemingly natural reaction to comfort children when they make mistakes," but some ways of doing this may distract children from learning from their mistakes, the researchers said.

Instead of shying away from children's mistakes, parents and teachers could offer this advice: "Mistakes happen, so let's try to pay attention to what went wrong and figure it out," Schroder said.

The study was published online Jan. 16 in the journal Developmental Cognitive Neuroscience