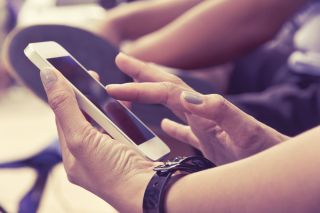 These days, it seems like smartphones are an integral part of people's daily lives — and a new study suggests that texting on these devices may actually change certain processes in the brain.

Texting may cause some people's brain waves to change temporarily, resulting in a pattern unique to texters, the researchers found.

The scientists called this unique pattern of brain waves the "texting rhythm." [10 Technologies That Will Transform Your Life]

They were surprised that the rhythm could be reproduced in different patients in the study, said Dr. William Tatum, a neurologist at the Mayo Clinic College of Medicine in Jacksonville, Florida, and the lead author of the study. The discovery of new brain-wave patterns is rare — it was more common in the years following the late 1920s, when the electroencephalogram (EEG) device, which shows brain activity, was invented, he said.

In the study, the researchers used EEG monitoring to look at the brain waves of 129 people while they texted or did other activities. Some of the patients in the study had been diagnosed with epilepsy, according to the study.

In addition to texting, the people in the study were asked to complete other tasks — such as various movements, cognitive activities and speech — to see if these tasks would result in the same rhythm, Tatum told Live Science. However, the brain-wave pattern that the researchers observed when people were texting, either on a smartphone or a tablet, was not seen when they were doing any other activity, he said.

Twenty-seven of the people in the study were found to demonstrate the texting rhythm, including some of the patients with epilepsy and some of the people without the condition, the researchers wrote in their study, published in the June issue of the journal Epilepsy & Behavior.

It's unclear why every person in the study did not exhibit the texting rhythm, Tatum said. However, other "reactive" brain rhythms that researchers have found previously — such as those triggered by things including flashing lights, hyperventilation and mental concentration — also do not occur in everyone, he said.

The researchers are currently investigating which people are most likely to experience the texting rhythm, he said. There are still many questions about the findings, and more studies of this brain-wave pattern are needed, the researchers said.

Tatum added that, at this point, there's no indication that people need to change the way they use their smartphones because of the texting rhythm. "We are making an effort to verify that this is an active rhythm without harm given the time-synced nature of the rhythm when it appears," he said.

However, the findings do suggest that texting can indeed alter brain activity, lending further credence to laws that ban texting and driving, the researchers wrote. Texting is more than a "simple distraction," they wrote.