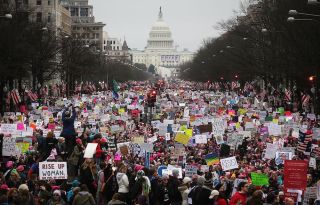 Protesters walk along Pennsylvania Avenue during the Women's March on Washington, with the U.S. Capitol in the background, on Jan. 21.
(Image: © Mario Tama | Getty Images)

What began as a political conversation on Reddit is turning into a national movement: Scientists are planning to march on Washington to express their support for rigorous scientific research.

"Slashing funding and restricting scientists from communicating their findings (from tax-funded research!) with the public is absurd and cannot be allowed to stand as policy," Scientists March on Washington, the group organizing the march, wrote on their website. "This is a non-partisan issue that reaches far beyond people in the STEM fields and should concern anyone who values empirical research and science," they wrote, referring to the science, technology, engineering and math fields of study. [10 Historically Significant Political Protests]

The march will be held in April, according to a tweet that says, "The March for Science will take place on April 22, 2017. We hope to see you in D.C. and around the world! #ScienceMarch"

The scientists' march was inspired by the Women's March on Washington, which drew at least 3.3 million people around the country on Saturday (Jan. 21), the day after Trump's inauguration.

A day later (Jan. 22), a Reddit conversation discussing the future of science in the United States came to the conclusion that another march, this time for scientists, could help convey the country's support and respect for research, The Washington Post reported.

"There needs to be a Scientists' March on Washington," one commenter said. Other Reddit commenters jumped on board, with both scientists and science supporters saying they would "go in a heartbeat."

The group tweeted that all people, regardless of whether they are scientists, are welcome. They also encouraged supporters to set up sister marches in other cities.

That's because, as they tweeted, "Public pressure can be an effective tool against censorship!" — largely in response to a news story that the U.S. Department of Agriculture had rescinded a gag order barring researchers from talking with the public after a large public outcry against it.

The Department of Agriculture wasn't the only governmental agency that reportedly received a communication ban. The Environmental Protection Agency (EPA), Department of Health and Human Services, Department of Transportation and National Park Service were also told to stop communicating with the public, BuzzFeed reported. (Some National Park Service Twitter accounts tweeted about climate change after the ban, including @GoldenGateNPS and @BadlandsNPS, but some of those tweets were later deleted.)

"Demands to shut down informational websites and prevent the release of scientific findings are straight out of Orwell," Ken Kimmell, president of the Union of Concerned Scientists, a science advocacy group, said in a statement. "We don't live in a world of 'alternative facts' — you can’t delete climate change and you can't overrule the laws of physics by preventing scientists from talking about them." [The Reality of Climate Change: 10 Myths Busted]

Meanwhile, another group, called 314 Action, is encouraging scientists to run for public office, according to The Atlantic. The group, named for the Pi ratio, is similar to Emily's List, which backs pro-choice female candidates, and VoteVets, which supports candidates who are U.S. veterans, The Atlantic said.

"A lot of scientists traditionally feel that science is above politics, but we're seeing that politics is not above getting involved in science," founder Shaughnessy Naughton told The Atlantic. "We're losing, and the only way to stop that is to get more people with scientific backgrounds at the table."

As of Jan. 25, there was at least one scientist running for public office: Michael Eisen, a Howard Hughes Medical Institute Investigator and professor of genetics, genomics and development at the University of California, Berkeley, according to his Twitter account.

Eisen plans to run in 2018 for Sen. Dianne Feinstein's seat (it's unclear whether she's seeking reelection), he told Live Science.

"It's time for scientists and people who care about science — and about the environment and human rights — to step forward," Eisen told Live Science in an email. "And so I am."

Editor's Note: This story was updated to include the date of the march.