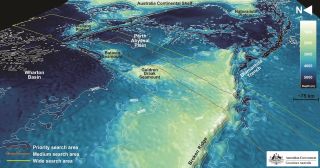 The official search for Malaysia Airlines Flight MH370 was called off today (Jan. 17), nearly three years after the plane mysteriously vanished over the Indian Ocean.

The Boeing 777 aircraft went missing on March 8, 2014, while en route from Kuala Lumpur, Malaysia, to Beijing with 239 people onboard. Most of the passengers were from China.

While some pieces of debris have been discovered, the aircraft's body was never found, and investigators have never been able to say what caused the crash. [Flight 370: Photos of the Search for Missing Malaysian Plane]

"Today, the last search vessel has left the underwater search area," said a joint statement from the Australian, Chinese and Malaysian officials who conducted the search. "Despite every effort using the best science available, cutting-edge technology, as well as modeling and advice from highly skilled professionals who are the best in their field, unfortunately, the search has not been able to locate the aircraft."

With the help of scientific studies, researchers have continued to refine areas of probability for where the plane is likely to be found, the statement said, but a specific location remains elusive. The underwater search team that looked for the aircraft said that it had scoured more than 46,300 square miles (120,000 square kilometers) of the seafloor during the search.

"The decision to suspend the underwater search has not been taken lightly nor without sadness," the joint statement said. "We remain hopeful that new information will come to light and that at some point in the future the aircraft will be located."

The disappearance of MH370 has baffled aviation experts and spawned dozens of theories about what happened to the plane (including conspiracy theories), ranging from a hijacking to a loss of oxygen to a power interruption.

Investigators do know that the flight dropped communication with air traffic control less than an hour after takeoff, but then it flew south, off course, for several hours. After examining wing wreckage and satellite data, the Australian Transport Safety Bureau (ATSB) concluded in November 2016 that there was probably no one at the aircraft's controls when MH370 crashed.

The agency determined that the last signals from MH370 were consistent with "a high and increasing rate of descent," which suggests that the pilots were not able to — or did not attempt — an emergency water landing, according to the analysis.

Members of Voice370, a support group for families of the victims, were not pleased with the decision to call off the search.

"In our view, extending the search to the new area defined by the experts is an inescapable duty owed to the flying public in the interest of aviation safety," the group said in a statement that responded to the announcement.