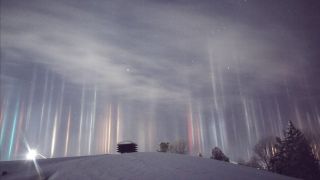 Despite appearances, aliens have not descended upon a snowy scape in Ontario, Canada. Rather, an Earthly phenomenon is the cause of a ring of brilliant shafts of pastel-colored lights, captured in the wee hours of the morning by Timmy Joe Elzinga using his smartphone camera.

It was 1:30 a.m. local time in northern Ontario on Jan. 6 when Elzinga spotted the phenomenon.

"When I first saw these light beams shooting through the sky from my bathroom window, I was sure they were the northern lights," Elzinga told Live Science in an email. "I was able to capture these images both because the lights were so bright and pronounced and because I'm a bit of an amateur photographer." That experience, he said, led him to use "the manual settings on my phone to adjust the time the aperture was open to 8 seconds."

Elzinga said he wasn't aware of this light-pillar phenomenon until he saw it firsthand. [7 Things Most Often Mistaken for UFOs]

Ice from high altitudes explains the pillars that Elzinga saw, NASA said. During some cold, wintry nights, flat ice crystals that normally reside higher up in the atmosphere come fluttering closer to the ground, according to NASA. These whimsically wobbling ice crystals are sometimes referred to as crystal fog. When the crystals reflect ground lights from nearby cars and other bits of civilization, the result can be glorious: columns of light called "light pillars."

"The pillars are not physically over the lights or anywhere else in space for that matter — like all halos, they are purely the collected light beams from all the millions of crystals, which just happen to be reflecting light towards your eyes or camera," said Les Cowley, a retired physicist and atmospheric optics expert, on his site Atmospheric Optics.

The light pillars are so strange-looking that people often mistake them for UFOs, according to EarthSky.org. "There are said to be a lot of UFO reports caused by light pillars over Niagara Falls, where the mist from the rush of descending water interacts with the city's many upward-facing spotlights," EarthSky reported.

The beams resemble so-called sun pillars, which appear as columns of light extending from the sun due to light reflecting off ice crystals in the upper atmosphere, according to NASA.

And Elzinga saw quite a show.

To capture the northern Ontario pillars, Elzinga said he got creative.

"I also opened the window and removed the screen so I could get an unobstructed view, and I used the ridges in my bathroom window's track as a make shift tripod so I could avoid motion blur," he said. "I ran outside to see if I could get some more images and even went for a drive, but the light pillars seem[ed] to look best right from my area of town."

After 45 minutes or so, the lights were too dim for Elzinga to see them, he said.