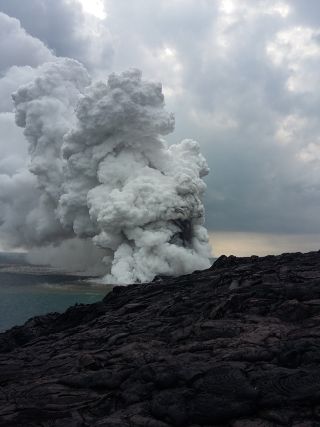 A lava delta — an expanse of unstable rocky terrain formed by cooled lava — in Hawaii Volcanoes National Park collapsed suddenly into the ocean on New Year's Eve, creating a spectacle of volcanic ash, steam and gas to mark the end of 2016.

The 26-acre (11 hectares) delta was created by a recent and massive lava flow from the Kilauea volcano pouring into the sea. The feature's collapse produced towering plumes of ash and sent large waves washing over and eroding the nearby sea cliff, according to the U.S. National Park Service (NPS). [Explosive Images: Hawaii's Kilauea Erupts for 30 Years]

Loud cracks throughout the area were audible after the collapse, which destroyed a public viewing area, park rangers reported in a statement.

After the explosive event, the Kamokuna ocean entry, where the lava met the sea, was closed to the public, and a temporary flight restriction prohibited air travel 1,000 feet (305 meters) above ground level, NPS officials said.

No one was harmed when the delta gave way, though the power of the fracturing rock was considerable, said Park Superintendent Cindy Orlando.

"Fortunately, there were no aircraft or boats reported in the area at the time of the collapse, nor were any visitors on the delta itself, which is closed for public safety," Orlando said in the statement.

"Had anyone been close by on land, water or air, lives would have surely been lost," she added.

However, several tourists experienced an uncomfortably close call hours after the delta collapsed, when they snuck past a barricade to get a closer look at the lava.

Around 7 p.m. local time on Dec. 31, hours after the initial collapse, five park visitors crossed a closure line placed by park rangers and made their way toward the cliffs. Two park rangers chased the visitors down and returned them to safety; the cliff where they had been standing dropped into the sea 15 minutes later.

"It was a really close brush with death for them," Eruption Crew Ranger Travis Delimont said in a statement. "Luckily, they finally listened to us and turned around in time."