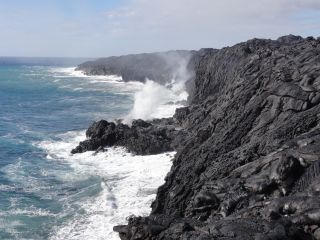 More than 30 small earthquakes, most too small to feel, shook the island of Hawaii in the past two weeks.

A sticky, slow-moving stream of lava called pahoehoe is crossing the coastal plain east of Hawaii Volcanoes National Park, dripping into the ocean and creating a delta. The lava flow is 0.6 miles (1 kilometer) wide, according to a statement from the U.S Geological Survey's Hawaii Volcano Observatory. The delta has grown 165 feet (50 meters) in width since Nov. 24, the USGS reports.

Lava has repeatedly streamed into the ocean from Kilauea's east rift zone since the volcano began its current eruption on Jan. 3, 1983. The lava oozes forth from rift vents fed by its Pu'uO'o crater. The crater itself holds a small lava lake, and several small lava flows erupted onto the crater floor in the past week, the USGS said.

To the northwest, a lava lake at Halema'uma'u crater, at the top of Kilauea, continues to rise and fall. The lava lake "breathes" as magma levels change within the volcano, and it hit a high on Oct. 29 before receding. The summit lava lake is deep within a cylindrical vent with nearly vertical sides. The lake level surged to within 100 feet (31 meters) of the top of the vent at that high point.

Deep inside the volcano, the vent supplying Halema'uma'u crater is connected to the actively erupting Pu'uO'o crater, according to a USGS statement.