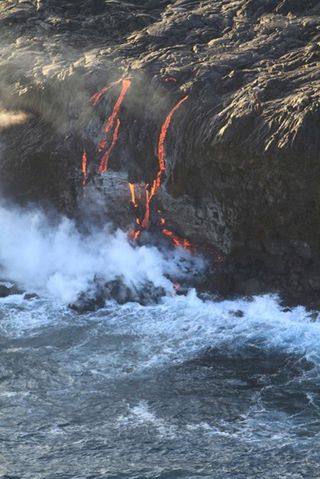 Lava overtopped a seaside cliff in Hawaii this weekend, sending up spectacular steam plumes caught on video and in pictures by a camera crew aboard a helicopter.

The slow-moving stream of molten rock, a sticky form of lava called "pahoehoe," crested the edge around 1 p.m. Hawaiian time on Saturday (Nov. 24), said Ken Hon, a geology professor at the University of Hawaii in Hilo. Hon and his students were accompanying a documentary crew at the site and saw the lava pour over the cliff.

Paradise Helicopters in Hawaii flew videographers Ann and Mick Kalber of Tropical Visions Video over the foaming ocean, capturing the formation of the world's newest land.

As the viscous lava drops downward, it tears and plops onto cooled rocks below, building 20-foot-tall (6 meter) towers that look like stalagmites, Hon said.

"It was really beautiful," he told OurAmazingPlanet. "At night, you could see them glowing because they were topped with hot lava. It made these very neat-looking towers."

The lava oozes from rift vents on the eastern flank of Hawaii's Kilauea volcano, fed by its Pu'u O'o crater. The molten stream is about 4 to 5 feet (1.2 to 1.5 meters) wide and travels slowly, advancing only about 1,600 feet (500 m) in two weeks, according to the Hawaii Volcano Observatory.

Though Hon, a volcanologist, was granted access to the area, the active lava flows are within the Kahauale'a Natural Area Reserve, which is closed to access and can be viewed only from the air or from Hawaii National Park's Kalapana viewing area.

Lava has repeatedly streamed into the ocean from Kilauea's east rift zone since the volcano began erupting Jan. 3, 1983. The last time molten rock from Kilauea met the ocean was in December 2011.