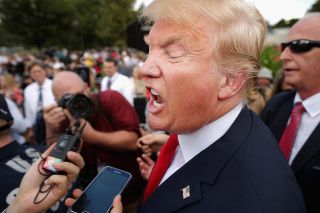 Nobel laureates and other top scientists are imploring Donald Trump to keep the Iran nuclear deal intact when he becomes president.

In an open letter, 36 scientists — including one who helped design the first hydrogen bomb — asked the president-elect to preserve the deal, known as the Joint Comprehensive Plan of Action (JCPOA).

"The JCPOA does not take any options off the table for you or any future president," the scientists wrote. "Indeed it makes it much easier for you to know if and when Iran heads for a bomb. It provides both time and legitimacy for an effective response." [The 10 Greatest Explosions Ever]

The nuclear deal was announced in 2015. According to the deal, the United States and five other major nations would lift some sanctions against Iran if the country began dismantling its nuclear-weapons program. According to the White House, by Jan. 16, 2016, Iran had shipped 25,000 pounds of enriched uranium out of the country, dismantled two-thirds of the centrifuges used to enrich uranium, disabled its heavy water reactor and allowed unprecedented international monitoring. The goal was to increase the time it would take Iran to make a nuclear bomb from a few months to at least a year.

In their open letter, the scientists touted the agreement as a success.

"The JCPOA has dramatically reduced the risk that Iran could suddenly produce significant quantities of nuclear-weapon materials," they wrote.

Critics of the Iran deal argue that it would at best delay Iran, not prevent it from acquiring nuclear capabilities. Trump's campaign rhetoric was even more pointed. In September 2016, for example, he said at a town hall in Virginia Beach that the deal was "the highest level of incompetence."

The organizer and first signatory on the letter is Richard Garwin, a physicist who designed the first hydrogen bomb built in 1952. Garwin is now an IBM Fellow Emeritus. The letter was also signed by physicist Robert Goldston of Princeton University, who has worked on a process to verify nuclear disarmament without requiring knowledge of classified information. Another signatory, nuclear scientist Siegfried Hecker of the Freeman Spogli Institute for International Studies, once directed the weapons lab at Los Alamos National Laboratory in New Mexico and has devoted his research to nuclear security.

The signers include Nobel laureates, winners of the most prestigious prize in the sciences. Signer Philip W. Anderson won the Nobel Prize in Physics in 1977 for his work on "the electronic structure of magnetic and disordered systems." Other signers: Leon Cooper won the physics prize in 1972 for developing a theory of superconductivity; Jerome Friedman, a particle physicist, won the prize in 1990 for work that informed the quark model of particle physics; and Sheldon Lee Glashow was a 1979 winner for work on the interactions between elementary particles.

Other Nobel laureates on the signatory list were David Gross, who was awarded the physics prize in 2004, and Burton Richter, who won in 1976.

Other notable names on the signatory list include Freeman Dyson, a physicist famous for the concept of the "Dyson sphere," or an artificial biosphere around a star built by intelligent extraterrestrials; Philip Coyle, the former associate director for National Security and International Affairs in the White House Office of Science and Technology Policy; and Allison Macfarlane, a former commissioner of the U.S. Nuclear Regulatory Commission.