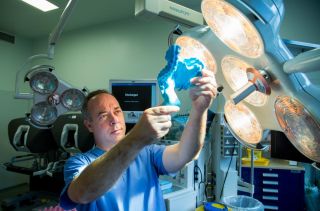 Dr. J. Calvin Coffey, a professor of surgery at the University of Limerick in Ireland, has concluded that the mesentery, which is a membrane found in the gut, is its own organ.
(Image: © Alan Place)

A mighty membrane that twists and turns through the gut is starting the new year with a new classification: Scientists are proposing that the structure, called the mesentery, be upgraded to an organ.

Scientists have known about the structure, which connects a person's small and large intestines to the abdominal wall and anchors them in place, according to the Mayo Clinic. However, until now, it was thought of as a number of distinct membranes by most scientists. Interestingly, in one of its earliest descriptions, none other than Leonardo da Vinci identified the membranes as a single structure, according to a recent review.

In the review, lead author Dr. Calvin Coffey, a professor of surgery at the University of Limerick's Graduate Entry Medical School in Ireland, and colleagues looked at past studies and literature on the mesentery. Coffey noted that throughout the 20th century, anatomy books have described the mesentery as a series of fragmented membranes; in other words, different mesenteries were associated with different parts of the intestines. [6 Strange Things the Government Knows About Your Body]

More recent studies looking at the mesentery in patients undergoing colorectal surgery and in cadavers led Coffey's team to conclude that the membrane is its own, continuous organ, according to the review, which was published in November in the journal The Lancet Gastroenterology and Hepatology.

The proposed reclassification of the mesentery as an organ "is relevant universally as it affects all of us," Coffey said in a statement.

By recognizing the anatomy and the structure of the mesentery, scientists can now focus on learning more about how the organ functions, Coffey said. In addition, they can also learn about diseases associated with the mesentery, he added.

"If you understand the function, you can identify abnormal function, and then you have disease," Coffey said.

The continuous nature of the mesentery, for example, may serve as a means for disease to spread from one part of the abdomen to another, according to the review.

In addition to studying disease, researchers may also look to the mesentery for new approaches to surgery, the authors said in the review.

Mesentery by dara.walsh on Sketchfab

The authors noted in the review that many anatomical and other features of the mesentery still need to be described.

For instance, what body system should the mesentery be classified in? "Whether the mesentery should be viewed as part of the intestinal, vascular, endocrine, cardiovascular or immunological systems is so far unclear, as it has important roles in all of them," the authors wrote.

Editor's Note: This article was updated on Jan. 9 to clarify that the mesentery's classification as an organ is a proposal from scientists; the mesentery is not 'officially' a new organ.