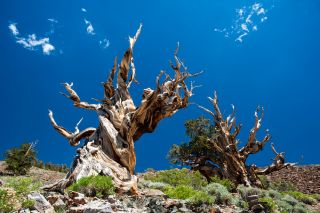 A bristlecone pine is the oldest tree in the world.
(Image: © Thomas Ramsauer | Shutterstock.com)

These ancients were around when ancient Sumerians scratched their cuneiform on clay tablets, and they were standing when Alexander the Great swept across Asia. They bore witness to both the rise and fall of the Roman Empire, survived Columbus' colonization of the New World, and saw the birth and expansion of the United States.

But now, because of climate change, the oldest trees on the planet may be facing their eventual extinction, a new study suggests.

Ancient bristlecone pines (Pinus longaeva), which thrive in the upper reaches of the White Mountains in California, could be supplanted by younger trees from an upstart species as temperatures warm and baby trees begin to grow higher on the mountain.

"I think what's going to happen — at least in some areas — is that we're going to lose bristlecone," study co-author Brian Smithers, an ecologist at the University of California, Davis, said in a statement. "There's not very much room upslope before you get to the top of the mountain." [Nature's Giants: The Tallest Trees on Earth]

Grove of the ancients

The world's oldest genetically unique trees reside just below the tree line, where the scant rainfall, frigid air, and rocky limestone soil eliminates all but the hardiest of species. From about 9,500 to 11,500 feet (2,900 to 3,500 meters), bristlecone pines dominate the landscape. In the few patches with sandier, more granite-like soils, native limber pine trees (Pinus flexilis) cluster, according to the statement.

Bristlecone pines thrive in this forbidding terrain in part by growing at a glacial pace, adding just 1 inch (2.5 centimeters) of girth each year, according to PBS.org. This slow growth, combined with an absence of competition from other trees and parasites, may contribute to their remarkable longevity: The oldest individual tree in the world is a 5,062-year-old P. longaeva in the White Mountains, and the second-oldest tree, dubbed Methuselah, is also a Great Basin bristlecone pine living nearby. By contrast, the oldest officially dated tree in Europe is just 1,075 years old (though there are unofficially dated trees that are likely much older).

Above the tree line, temperatures are too cold to support trees, but global warming has shifted the tree line higher up the mountain. Because temperature typically governs where trees live, that would ordinarily mean that trees such as the bristlecone pine would simply start growing at higher altitudes.

To see whether bristlecone pines' range was moving to higher altitudes, Smithers and his colleagues determined the historic tree line by mapping the location of groves of adult trees that were more than 10 feet (3 m) tall. Next, they counted the number of young trees of each species above and below that historic tree line.

Most of the baby trees colonizing the higher altitudes above the tree line appear to be limber pines, the researchers found. The limber pines have even taken over the rocky limestone soils at higher altitudes, Smithers reported earlier this month at the American Geophysical Union's annual meeting in San Francisco.

It turned out that limber pines got an assist from the Clark's nutcracker, a local bird that munches on and disperses the trees' seeds. This process speeds up how quickly limber pines can colonize new locations, the study found.

"Whoever can get there first wins," Smithers said. "And it looks like limber pine is just better able to get there quicker."

Meanwhile, warmer temperatures below the tree line could mean less desirable conditions and increased competition for the existing bristlecone pines. As a follow-up, Smithers wants to see whether limber pines are better than their ancient neighbors at harvesting light and water to grow.