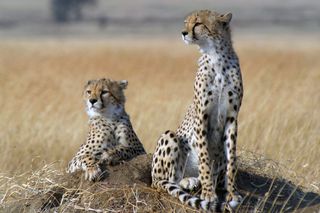 A new study has revealed that just 7,100 cheetahs remain in the world.
(Image: © Zoological Society of London)

The cheetah, the world's fastest land animal, is headed toward extinction, largely due to unprecedented habitat loss, scientists announced in a new study.

The research revealed that only 7,100 cheetahs remain globally and that the speedy animal has lost 91 percent of its historic habitat range. Due to human development, cheetahs' habitat decreased from a historical range totaling about 13 million square miles (33,056,767 square kilometers) before 1900, to now only covering about 280,000 square miles (724,514 square km), according to the researchers.

In Zimbabwe, where the cheetah distribution is well-documented, the population has plummeted from 1,200 individuals in 2000 to about 170 individuals in 2016, according to the study. Because of these dramatic losses, the study's authors are urging scientists to change the cheetah's conservation status from "vulnerable" (which means the animal is likely to become endangered unless threats improve) to "endangered" (which means the animal is facing a very high risk of extinction in the wild) on the International Union for Conservation of Nature's Red List of Threatened Species, which tracks at-risk species.

Cheetahs are particularly sensitive to habitat loss because of their large space requirements, said lead study author Sarah Durant, a senior researcher with the Zoological Society of London and the Wildlife Conservation Society (WCS) who focuses on the conservation of cheetahs and African wild dogs. [Cat Album: The Life of a Cheetah]

"Given the secretive nature of this elusive cat, it has been difficult to gather hard information on the species, leading to its plight being overlooked," Durant said in a statement from the WCS. "Our findings show that the large space requirements for cheetah[s], coupled with the complex range of threats faced by the species in the wild, mean that it is likely to be much more vulnerable to extinction than was previously thought."

The threats cheetahs face are largely caused by humans. These threats include overhunting by people, as well as habitat loss, the exotic-pet trade and illegal trafficking of cheetah parts, representatives with the WCS said in a statement.

Although there are some conservation measures in place for cheetahs, such as protected areas, these cats are one of the world's most wide-ranging carnivores, and 77 percent of their habitat falls outside protected areas, according to the study. These geographical complications make the cheetah difficult to protect, and so scientists are looking for a more holistic conservation approach.

"The takeaway from this pinnacle study is that securing protected areas alone is not enough," said study co-author Kim Young-Overton, director of the Cheetah Program for Panthera, a conservation organization focused on wild cat species. "We must think bigger, conserving across the mosaic of protected and unprotected landscapes that these far-ranging cats inhabit, if we are to avert the otherwise certain loss of the cheetah forever."

The study's authors are calling for the cheetah's status to be changed to "endangered" because this listing can lead to greater international conservation support, according to the WCS statement. For example, an IUCN listing of "endangered" increases recognition for the animal, as the Red List updates can make news around the world.

The study was detailed in a paper published online Dec. 26 in the journal Proceedings of the National Academy of Sciences.