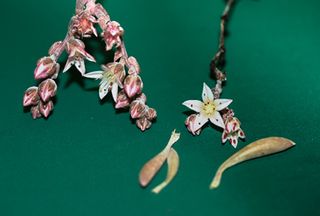 Music icon Jimi Hendrix is famous for his many songs, including "Purple Haze" and "The Wind Cries Mary," but now he'll also be remembered for an entirely different reason: Botanists have named a newly discovered species of rare, flowery succulent after him, a new study reports.

The plant, named Dudleya hendrixii, is found only in a sliver of Baja California, Mexico, in an area called the Colonet Peninsula (known as Punta Colonet in Spanish). D. hendrixii is thin and stalky, and typically grows to be about 1 foot (0.3 meters) tall. The plant has succulent leaves and flowers that are hot pink and white, said study co-author Mark Dodero, who discovered the plant while in graduate school at San Diego State University. Dodero now works as a senior biologist at San Diego environmental consulting firm RECON Environmental.

Dodero and study co-author Stephen McCabe, a retired botanist formerly at the University of California, Santa Cruz, jointly decided to name the plant in Hendrix's honor. The idea for the name took root after Dodero realized he was listening to Hendrix's song "Voodoo Child" at the very moment he found the pinkish plant. Hendrix died in 1970 at the age of 27. [In Photos: Plants in Danger of Disappearing]

D. hendrixii is a summer deciduous, meaning it dies in the summer and regrows in the fall, the researchers said.

Although D. hendrixii is a new addition to the science world, it already needs the help of scientists and conservationists. That's because its habitat, which is only a couple of acres, is threatened by grazing, farmers, off-road traffic and housing developments, the researchers said.

"It's the Mexican equivalent of an endangered species, although they don't use the same criteria we do in the United States," study co-author Michael Simpson, a plant biologist at San Diego State University, said in a statement.

Punta Colonet may soon be home to a major shipping port, which would further imperil the area's fragile environment, according to the researchers. In order to protect the newfound species, they're urging Mexican officials and conservation groups to protect D. hendrixii, they said.

D. hendrixii is hardly the only species name inspired by music. For instance, the damselfly Umma gumma is named for the 1969 Pink Floyd double album "Ummagumma," which is British slang for sex, Live Science reported in May. In addition, the tarantula Aphonopelma johnnycashi is named for singer and songwriter Johnny Cash, because the spider's dark coloring reminded researchers of Cash's head-to-toe black attire, Live Science reported in February.

The new findings were published in the October issue of the journal Madroño.