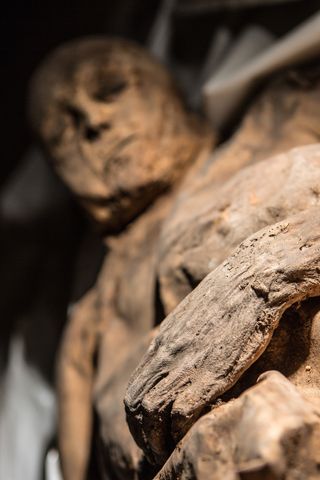 The mummy of a child discovered in a crypt beneath a Lithuanian church harbors the oldest sample found to date of the virus that causes smallpox, a new report said.

But the researchers' analysis of the virus, called the variola virus, suggests that smallpox first appeared in humans much more recently than thought, the researchers said. Scientists had thought that smallpox was an ancient disease that plagued humanity for millennia.

The researchers drew their conclusion by taking virus from the mummy of the child, who lived between 1643 and 1665, and comparing that strain against variola viruses that date to the mid-1900s. The differences, or mutations, that the researchers found suggest that the strains shared a common ancestor that first arose between 1588 and 1645, the researchers said. That time period was filled with human exploration, migration and colonization — activities that could have spread the virus worldwide, the researchers noted. [Tiny & Nasty: Images of Things That Make Us Sick]

More studies are needed to confirm that the smallpox virus indeed arose that recently, but if it did, this would cast doubt on the previously suggested idea that people in ancient Egypt had smallpox. Although 3,000- to 4,000-year-old Egyptian mummies have pockmark scarring, a symptom of smallpox, these scars could have also come from measles or chickenpox, said the study's first author, Ana Duggan, a postdoctoral fellow at the McMaster University Ancient DNA Centre in Canada.

If smallpox had arisen thousands of years ago, the researchers would have seen a high degree of diversity between the viruses that they compared, Duggan said. "We don't see that," she told Live Science.

In addition, the researchers' analysis of the mummy's virus also suggests that the two known forms of the virus — variola major and variola minor — likely split from each other after the English doctor Edward Jenner famously developed the first smallpox vaccine, in the late 1700s, the researchers said.

The finding about the major-minor split is "by no means conclusive, but it opens the idea that maybe this split between the major and the less virulent, minor strain was an evolutionary response to the vaccine," Duggan said.

Researchers have been studying several mummies found in the crypt of the Dominican Church of the Holy Spirit in Vilnius, Lithuania, since the 1930s. But the authors of the new study are the first to figure out that one mummy, of a child between ages 2 and 4, contained the smallpox virus.

It's unclear whether the child was male or female, but the researchers did establish, through radiocarbon dating, that the child lived about 360 years ago. Smallpox outbreaks were happening across Europe at that time.

Smallpox once killed about three out of every 10 people who got it. The illness could also lead to disfigurement and blindness. Smallpox is the first and so far only human disease eradicated by vaccination, Duggan said.

The scientists said they are hopeful that the findings will help virologists trace the background of smallpox and other viruses. [27 Devastating Infectious Diseases]

"We still don't know when smallpox first appeared in humans, and we don't know what animal it came from. And we don't know that because we don't have any older historical samples to work with" study co-author Edward Holmes, a professor of evolutionary biology at the University of Sydney in Australia, said in the statement.

The new study puts "a new perspective on this very important disease, but it's also showing us that our historical knowledge of viruses is just the tip of the iceberg," Holmes said.

The study was published online today (Dec. 8) in the journal Current Biology.