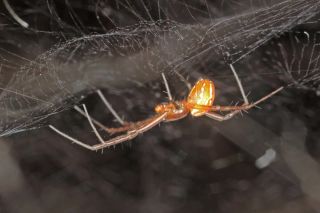 Most male spiders are deadbeat dads. Not Manogea porracea. New research finds that the males of this unassuming Central and South American species dote on their offspring.

Male M. porracea spiders protect their egg sacs from predators and tidy up the webs surrounding the eggs, according to a new study published Nov. 15 in the journal Animal Behavior. This is the first solitary spider species ever known to engage in paternal care, said study leader Rafael Rios Moura, a researcher at Federal University of Uberlândia in Minas Gerais, Brazil.

"There is a high diversity of spider species and several spider families are well studied by research groups around the world," Moura told Live Science. "Even in this situation, none of them found males caring for offspring." [The Animal Kingdom's Most Devoted Dads]

M. porracea is a small brownish-orange spider found throughout Central and South America from Panama to Argentina. It lives on webs it creates on low branches and leaf litter. When males and females mate, the male builds a web right above his partner's and stays there. That was one of the first hints that these spiders may be good daddies, Moura said. In initial studies that focused on the spiders' mating habits, he and his colleagues noticed that many webs were populated only by egg sacs, spiderlings and male spiders, not females.

Systematic observations revealed that these males are doting dads. They were observed brushing rainwater from egg sacs and repairing broken webbing. Nearly half of webs without a spider parent collapsed before the eggs could hatch, while all webs occupied by either both parents or just males survived.

Another unusual discovery, Moura said, was the finding that male spiders of this species lived longer than females, explaining why daddy was often left behind in the wild as the only protector of the eggs. Females of this species tend to bulk up during reproduction, Moura said, and their fatty bodies may make them particularly attractive to predators.

Male spiders rarely outlive female spiders, which is one reason they tend to be bad dads, Moura said — females often eat them after mating, or they just stop eating and die after they've had sex. The fact that M. porracea builds its nest right above its mate means that the spider can be relatively certain it's his own offspring he's protecting, Moura said. It also means he can keep catching prey and eating in order to survive and protect his young.

The only other helpful spider dad that has ever been discovered among the 46,000 or so spider species known to science is a social spider from Africa called Stegodyphus domicola, which lives in groups and has been seen guarding its offspring, Moura and his colleagues reported. That makes the solitary M. porracea a rare find.

The researchers are now studying the conditions that make paternal care beneficial for spiders. It's possible, Moura said, that other spiders with similar mating systems might also be found to be caring fathers.