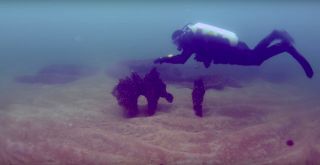 The researchers uncovered a total of eight ancient fishing traps — made of rods of braided hazel wood — and a 9,000-year-old pick axe that was made out of elk antlers.
(Image: © Lund University/YouTube)

A now-submerged Stone Age settlement has been mapped in the Baltic Sea, revealing how its ancient inhabitants lived along what was once a lagoon on the coast of Sweden some 9,000 years ago.

The exceptionally well-preserved site was discovered about seven years ago, after divers came upon what are now considered to be the oldest stationary fish traps in northern Europe. It turns out that those fishing traps were a part of the Haväng site, which archaeologists now believe was once a lagoon environment where Mesolithic humans lived during parts of the year.

Lead researcher Anton Hansson, a doctoral student in Quaternary geology at Lund University, and his colleagues reconstructed what the lagoon settlement would have looked like during the Mesolithic using a type of sonar system called multibeam echo-sounder technology. They mapped the surface of sites located about 65 feet (20 meters) below sea level, nearly 2 miles (3 kilometers) from the current shoreline. Along with the sonar mapping, the researchers also dug into the seabed to determine what the topography of the region would have looked like before it was submerged.

”These sites have been known, but only through scattered finds," Hansson said in a statement. "We now have the technology for more detailed interpretations of the landscape."

The researchers uncovered a total of eight ancient fishing traps — made of rods of braided hazel wood — and a 9,000-year-old pick axe that was made out of elk antlers, which bore inscriptions that have yet to be deciphered. [Photos: Stone Age Discoveries Made on Mysterious Island]

"These [fish trap] constructions, the oldest known in northern Europe, indicate extensive riverine and lagoonal fishing, previously not recorded during the Mesolithic in Sweden," the researchers wrote in their study, which was published online Aug. 30 in the journal Quaternary International. "Furthermore, bones and antlers of red deer with slaughter marks and a unique pick axe made of elk antler provide evidence of human exploitation of terrestrial resources."

The discoveries indicate the existence of mass fishing by these early humans, and therefore a semipermanent settlement, Hansson added.

"We know that this time is the start of quite a warm period during the Holocene history and people, I think, had quite good lives here. There was lots of food and quite a warm climate, at least during the summers," Hansson said in a video.

Since the sea level is now higher today than it was during the Holocene, Hansson said that many of these early settlements are currently underwater. The Haväng site was already buried in sediment when the sea level began to rise, which helped to preserve the site.