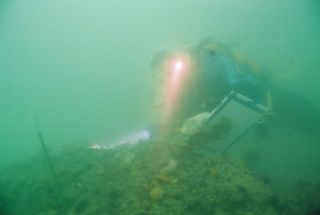 Erosion on the floor of the English Channel is revealing the remains of a busy Stone Age settlement, from a time when Europe and Britain were still linked by land, a team of archaeologists says.

The site, just off the Isle of Wight, dates back 8,000 years, not long before melting glaciers filled in the Channel and likely drove the settlement's last occupants north to higher ground.

"This is the only site of its kind in the United Kingdom," said Garry Momber, director of the Hampshire and Wight Trust for Maritime Archaeology, which led the recent excavations. "It is important because this is the period when modern people were blossoming, just coming out of the end of the Ice Age, living more like we do today in the valleys and lowlands."

Lobsters mucking around the seabed at the site about 10 years ago revealed a cache of Mesolithic flints, prompting further excavations that uncovered two hearths (ancient ovens) dangling precariously from the edge of an underwater cliff.

Burnt wood fragments gouged with cut marks and a layer of wood chippings were found lying under 35 feet of water during the latest dig. Divers brought the material to the surface still embedded in slabs of the sea floor that were carried up in specially-designed boxes, which were then pieced back together and examined and dated in the lab.

"We now have unequivocal evidence of human activity at the site," Momber told LiveScience. "There were people here actively making stuff and being quite industrious."

At 8,000-years-old, the settlement is the only underwater Mesolithic site in Britain, though it is probably part of a much larger area of occupation yet to be uncovered, Momber said.

As the climate began to warm up near the end of the Ice Age about 10,000 years ago, people were moving into Northern Europe and settling down in the many river valleys left behind by melting glaciers, Momber explained. Many of the valleys, such as the ones now beneath the English Channel, were eventually inundated completely when temperatures returned to normal.

"A good chunk of the material left behind from this cultural period is eventually going to be found underwater," Momber said.

Despite the logistical problems of underwater archaeology, the Isle of Wight site and others like it are usually better preserved than their counterparts on land, Momber said.

When the floodwater rose slowly in the English Channel, it deposited layers of silt atop the settlement, encasing it in an oxygen-free environment that preserves even organic materials such as wood and food.

"With underwater sites, all the trappings of a society are going to remain, not just the stone," Momber said. The trade-off is an environment that can carry away the precious remains at any time—a real concern at the Isle of Wight settlement.

"The erosion of this site would be a loss of information to humanity, not just the washing away of a bit of material," he said. "There is the potential to find so much more there; there is so much to learn."