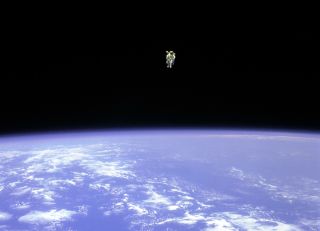 "Get me a napkin quick," said Apollo 10 commander Tom Stafford with some urgency. "There's a turd floating through the air."

"I didn't do it. It ain't one of mine," replied command module pilot John Young.

"I don't think it's one of mine," added lunar module pilot Gene Cernan.

"Mine was a little more sticky than that. Throw that away," said Stafford.

Young then uttered "God Almighty," before the trio broke into laughter.

This isn't the script to some space comedy; it's the real transcript from a conversation between the 1969 NASA crew about an escaped poop while they were travelling, in zero-gravity, to the moon. It's also one of the earliest historic references to how a basic bodily function poses a huge — and potentially life-threatening — challenge in space.

RELATED: How Do Astronauts Poop in Space?

The International Space Station's orbital lavatory is light-years beyond Apollo 10's problematic poop baggy-sticky tape solution, but when NASA sends astronauts to solar system destinations that could mean being stuck in a spacesuit for (potentially) days, how will our spacefliers "go" where no person has gone before?

It turns out that, actually, the U.S. space agency isn't quite sure and they're offering a $30,000 award via the HeroX crowdsourcing website for the person who works it out.

"The US National Aeronautics and Space Administration (NASA) seeks proposed solutions for fecal, urine, and menstrual management systems to be used in the crew's launch and entry suits over a continuous duration of up to 144 hours," NASA writes. "An in-suit waste management system would be beneficial for contingency scenarios or for any long duration tasks."

Basically, NASA is seeking a super high-tech diaper that can be worn by astronauts when they are away from the nearest space station Porta Potty for up to six days.

"After all: when you gotta go, you gotta go. And sometimes you gotta go in a total vacuum," the HeroX website cheerily explains. But as outlined by the "Space Poop Challenge," the problem is anything but cheery.

When you remove gravity from daily tasks we take for granted on Earth, a myriad of new issues present themselves in space. Primarily with human waste, there's the obvious problem of hygiene. The space station solves this by using directed airflow through a special device that pulls poop and urine way from the astronauts' bodies (and the space station's air) and compresses the waste in a vacuum to kill pathogens.

But to miniaturize a system that provides the same functionality within a sealed spacesuit, hands free, for men and women of all shapes and sizes, seems like a very tall order. And the system needs to allow the user to implement it within 5 minutes.

Though we've come a long way since this Apollo era mishap, going to the bathroom in space remains a complicated, necessary, frustrating and often mystifying component of human spaceflight. And before we send astronauts beyond Earth orbit, we have a lot of work to do in the toilet department, so if you have any ideas accept NASA's challenge.