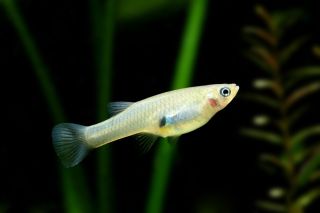 Male mosquitofish with bigger genitals are typically best at coercing females into the "sack," but now researchers have found that females that are not interested in such pushy lovers grow bigger brains to fight back.

Having more brain power may give the females the smarts they need to find clever ways of avoiding male assaults, researchers said.

This is just one example of the arms race that takes place between the sexes. The conflict arises in the animal kingdom because of the different strategies that males and females often take when it comes to continuing their genetic legacies. Females of most species are typically seen as choosy about their mates, because they often have to pay a high biological price for bearing offspring. On the other hand, sex usually exacts a low biological toll on males, so an approach that they frequently pursue is to mate as often as possible. [The 7 Weirdest Animal Penises]

To learn more about the consequences of sexual conflict, researchers investigated the eastern mosquitofish (Gambusia holbrooki), a tiny fish that is native to the eastern and southern United States. Unlike most of the rest of the animal kingdom, in this species, males do not generally court females. Instead, male eastern mosquitofish usually try to force themselves upon females, making up to 1,000 attempts per day.

Previous research has found that male eastern mosquitofish with larger gonopodiums (a modified fin that's the fish equivalent of a penis) are better at coercing females into sex than their less-endowed counterparts.

Prior work that was published in 2010 in the journal Functional Ecology has also revealed that prey species often have relatively larger brains than their predators — likely in order to escape their hunters. Perhaps, in order to avoid such coercion from males with oversized genitals (the "predators" in this scenario), female eastern mosquitofish would develop larger brains, the researchers surmised.

The researchers bred two different groups of male eastern mosquitofish: one was chosen for large genitals, and the other for small genitals. Females that were born in each group only mated with males of their group. [See Photos of a Weird 'Penis Head' Fish]

After eight generations of breeding, the large-genital males had private parts that averaged about 6.4 millimeters long, while those of the small-genital males averaged only about 5.8 mm long. (In comparison, the average body size of both groups of males was 22.18 mm.)

The researchers then paired each of the 30 to 40 small- and large-genital males with two virgin females (upping the chances the males would sire offspring). The female offspring from each group were then raised (10 females for one male) with a male from their group, so offspring with big-genital fathers would be raised with other big-genital males from the same genetic line.

"We did not expect to find that female, but not male, brain size increased in lines selected for a longer gonopodium," said study lead author Séverine Buechel, an evolutionary biologist at Stockholm University. "We expected both evading a male and pursuing a female to be cognitively demanding, and we therefore expected male coercion to select for larger brains in both sexes."

All in all, "the mating system adopted by a species is an important factor shaping male and female brain anatomy," Buechel told Live Science. "We hope that this study provides a prospect for future research on brain evolution in relation to different mating strategies."

Buechel and her colleaguesdetailed their findings online Nov. 23 in the journal Proceedings of the Royal Society B.