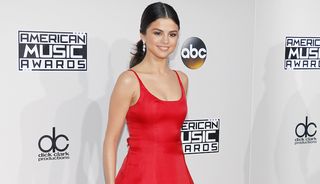 Selena Gomez opened up about her experience with mental health issues in an acceptance speech last night (Nov. 20) at the American Music Awards.

"I was absolutely broken inside," Gomez said when she accepted her award for Favorite Female Artist – Pop/Rock. "If you are broken, you don't have to stay broken."

Gomez, who is 24, recently took a break from the spotlight to treat her anxiety and depression, NBC News reported.

It is not uncommon for depression to emerge in a person's late teens or early 20s, said Dr. Matthew Lorber, the acting director of the child and adolescent psychiatry department at Lenox Hill Hospital in New York City. Lorber has not treated Gomez. [7 Ways to Recognize Depression in 20-Somethings]

Part of the reason for this is due to how the brain develops.

"As the brain is developing and changing, it's susceptible to something new happening, and sometimes that might mean depression," Lorber said.

In a person who is genetically predisposed to depression, a major life change or traumatic event can trigger the disorder, Lorber said. Indeed, in late adolescence and young adulthood, people face a number of serious stressors, such as finishing high school and beginning college. Life transitions always have a high risk for triggering depression, Lorber added.

The impact of these different pressures on someone with a developing brain — who might already be predisposed to depression — can put that person at high risk for having a first depressive episode, Lorber said.

Lorber noted that while the onset of depression is often recognized in a person's late teens or early 20s, that doesn't mean that the condition wasn't there earlier.

In younger teens and children, for example, depression can sometimes present itself as irritability rather than sadness, Lorber said.

Depression is more common in teenage girls and young women than in their male counterparts, Lorber said.

But before puberty, the rates of depression and other mood disorders such as anxiety, are the same in boys and girls, Lorber said. After puberty, girls are nearly twice as likely to be diagnosed with depression, he said.