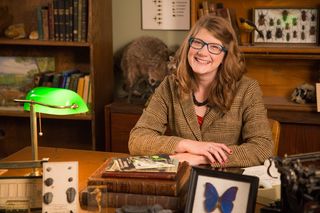 In this series of articles, Live Science turns the spotlight onto some of YouTube's most popular science channels. Their creators weave together graphics, footage, animation and sound design in videos that can be as whimsical as they are informative, employing a range of techniques and styles. Yet all of them all share a general curiosity and enthusiasm for the unexpected and fascinating science stories that exist in the world around us.

YouTube's 'The Brain Scoop': Meet the 'Chief Curiosity Correspondent' for the Field Museum

From mounts of massive T. rex skeletons, to dioramas of animals in recreated habitats, to exhibits describing our evolutionary ancestry and our modern microbial partnerships, natural history museums present glimpses of Earth's distant past and explanations of its current ecosystems and inhabitants.

These museums open windows into remote parts of the world, offering close-up views of what we see every day — and of many things that we overlook. Museum exhibits reveal the delicate balance of life and describe the connections between all creatures, living and extinct.

However, for all the wonders displayed in museums, far more remains hidden from public view.

Vast collections of fossils, objects and preserved specimens are housed in storage and studied by teams of scientists, whose work is also largely invisible to the public. But on YouTube's "The Brain Scoop," host and co-creator Emily Graslie — the "Chief Curiosity Correspondent" at the Field Museum of Natural History (FMNH) in Chicago — uses video to take viewers behind the scenes at FMNH, bringing its secret treasures and scientific research and researchers to light.

And that covers a lot of ground — both inside the museum and in the field with its experts. Episodes include a sit-down with so-called "death rocks," a tour of the FMNH insect collection, an expedition to find one of the world's rarest plants, and a look at how scientists learn about Earth's environmental history from bird vomit.

From art intern to volunteer curator

Graslie first gravitated toward natural history collections while studying for a fine arts degree at the University of Montana. She interned at the university's Phillip L. Wright Zoological Museum during her senior year, conducting an independent study in scientific illustration. After graduating in 2011, she continued working at the museum as a volunteer.

"I started learning more about processes and specimens — cataloguing them, doing specimen prep in the lab," Graslie told Live Science. "The art internship started to blossom into a volunteer curatorial position."

Graslie also began blogging on Tumblr about her work at the museum. Collaborations with YouTube creator Hank Green led to the launch of "The Brain Scoop" in January 2013.

"The university wasn't involved — I was making the videos on my own time, for my own enjoyment and for the pleasure of sharing this stuff with other people," Graslie said. "So there wasn't a lot of direction. We didn't know what we wanted to be, but we had the freedom to experiment. That was hugely important for the growth of the channel, it allowed us to do a lot of creative things."

When Graslie visited Chicago a few months after "The Brain Scoop" debuted, she was offered the opportunity for a new collaboration — bringing the show to the FMNH, beginning in July 2013.

"All of a sudden, we had access to the best resources — which were the collections and the experts who worked in the collections," Graslie explained.

"That was something we didn't have in Montana — we had freedom and a lot of creativity and a lot of dead animals, but no context for how those specimens were being used. Coming to the Field Museum lent a lot of credibility to the show."

Graslie works closely with FMNH scientists to identify science topics and define story arcs, and researchers quickly discovered that "The Brain Scoop" could bring their work to hundreds of thousands of YouTube viewers. Some episodes are deep dives into one story, such as the identification of a bizarre fossil known as the "Tully Monster," while the series "Natural News" offers shorter weekly updates on the museum's ongoing scientific studies.

For Graslie, making "The Brain Scoop" also means learning something new and surprising with every episode, she told Live Science. One video in particular, about how scientists describe species, provided her with an unexpected wake-up call about the term "species" itself, which she discovered to be far less clearly defined than she had thought.

"Charles Darwin titled his book 'On the Origin of Species,' and within that book he didn't explicitly define what a species is! The more I started looking into this, the more I saw that there isn't one completely agreed-upon definition for a species," Graslie said.

Investigating how researchers define and organize species also inspired Graslie to explore the question using a more whimsical approach — by asking a group of FMNH scientists to apply taxonomic interpretations to candy.

"I got 12 different kinds of candy and four scientists who work on different kinds of organisms, and had them organize the candy based on what they believed to be a logical species concept or criteria," Graslie explained. "I didn't tell them ahead of time what we'd be doing, but they all went along with it and had a lot of fun."

One scientist — Margaret Thayer, a curator emeritus of insects — even performed an impromptu dissection, whipping out a pocketknife and cutting into a candy sample, which she then tasted to confirm the composition of its "guts."

"I don't usually do use this test for specimens," Thayer told Graslie.

And with the breadth of the FMNH collection and researchers still to explore, Graslie doesn't expect to run out of inspiration — or video subjects — anytime soon.

"As a content creator, if you're in a museum and you find yourself getting bored, I don't know what to tell you," she told Live Science. "The rabbit hole gets deeper, the longer you look into it."