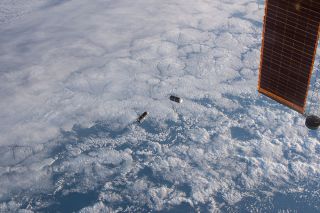 A satellite-imaging startup wants to make global change transparent, by capturing every part of the planet every day and sharing those images with the world.

The company, known as Planet, is aiming to make global change visible, accessible, and actionable for everyone, Will Marshall, the startup's co-founder and CEO, said during an address to the United Nations Sustainable Development Summit on Sept. 27, 2015. The company has deployed large fleets of small, inexpensive satellites designed solely to capture images of the planet.

"We miniaturized these little satellites, and we put them up [in space] in large fleets in order to image the planet, with their little cameras going around the Earth," Marshall said during a talk at the Bloomberg Technology Conference in June. "We've put up 133 of these satellites. It's the largest fleet of satellites doing Earth imaging in history, and the goal is to image every single point on the Earth's surface every day." [Earth from Above: 101 Stunning Images from Orbit]

Planet's network of tiny satellites is currently photographing half of Earth's landmass every day. The company told Quartz that in September 2016 alone, the satellites imaged 91 percent of the planet's landmass.

Planet has already begun sharing its data with organizations such as Amnesty International, which used the company's imagery to track refugee camps in Syria. The Monitoring of the Andean Amazon Project used Planet's images to locate illegal mining and deforestation in Peru. Planet's imagery is also being used to develop new technologies, such as Descartes Labs' project on machine-learning technology that is used to forecast land-use trends for farmers.

Recently, Planet signed an agreement with the National Geospatial-Intelligence Agency, the U.S. government's source of geospatial intelligence, the company announced on its blog last week.

"As the resurgence of commercial space continues, we're eager to help commercial companies, humanitarian organizations and organized governments around the world harness the power of space for the benefit of life down here on Earth," Jen Marcus, director of U.S. Government Strategic Partnerships for Planet, wrote in a blog post on the Planet website.