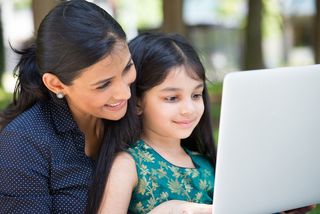 (Image: © A and N photography/Shutterstock.com)

Sharing information about kids can have potential risks for not only kids' privacy but also their general well-being, the researchers said. Kids can be harmed if, for example, photos that parents share online end up being misused by strangers who get access to them because of lax privacy policies on some social media sites, the researchers said.

"This information that's out there can be misused by predators — whether it is pedophiles or pornography sites," said Dr. Bahareh Keith, a pediatrician at the University of Florida Health and a co-author of the research, presented today (Oct. 21) at the American Academy of Pediatrics national meeting in San Francisco. [9 Weird Ways Kids Can Get Hurt]

One step that parents can take to avoid potential problems is to ask their kids, if they are old enough to understand, how they feel about the parents sharing their information — whether it's a report card, photo or other information about them — online. "It would be beneficial to give our child a voice in that decision," Stacey Steinberg, a professor of law at the University of Florida and a co-author of the research, told Live Science.

If parents choose to share information about their kids' behavioral problems, they should only do so anonymously, the researchers recommended.

Moreover, parents should check the privacy policies of the sites they use, so that, for example, they know who can see the posts they share, the researchers said.

In addition, parents should set up notifications that alert them to when their children's names appear in Google search results, the researchers recommended.

By posting about their kids online, parents create their kids' first "digital footprints," the researchers said. Previous research has suggested that 92 percent of 2-year-olds in the U.S. already have such "footprints" online, and about one-third appear on social media sites within the first 24 hours of life because their parents post their photos.

Parents should consider the effect that all this sharing may have on their kids' current and future well-being before they post, the researchers said. [10 Scientific Tips for Raising Happy Kids]

In their new research, the researchers looked at privacy laws as well as previous research on public health and social media use.

Their findings don't mean that sharing parental experiences on social media is inherently harmful, the researchers said. Sharing information on social media sites can be beneficial to families because it can give parents a chance to voice their struggles with difficult parenting experiences as well as to celebrate the joys of their lives, they said.

"But when we share on social media, we must all consider how our online actions affect our children's well-being, both today and long into the future," Keith said in a statement.