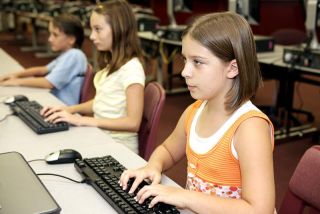 Though a majority of kids over 5 use the Internet, most American adults think children should have to wait until age 13 to connect to the Web without supervision, a new survey found.

In September, the C.S. Mott Children’s Hospital National Poll on Children's Health asked parents about their kids' Internet use. Among parents of children age 9 to 12, 87 percent said their kid uses the Internet. The same was true for 58 percent of parents with a kid age 5 to 8.

While two-thirds of parents said children should be at least age 13 to use the Internet independently, the poll found many kids already seem to have access to Web on their own. Twenty-nine percent of parents of 9- to 12-year-olds said their kid had his or her own Wi-Fi enabled device, as did 21 percent of parents with a kid age 5 to 8.

Most adults surveyed also said they supported updates that theFederal Trade Commissionis currently mulling for the Children’s Online Privacy Protection Act (COPPA), which was crafted in 1998, before the rise of smartphones. Sixty percent of adults said they strongly supported barring apps designed for kids from collecting personal information on the under-13 set. Fifty-six percent were also in favor of requiring apps to ask users to confirm that they are at least 13.

Since the digital landscape is constantly shifting, often too fast for regulations to keep up, the researchers who conducted the survey said it's important for parents to think about protecting their kids online.

"With so many young children using the Internet regularly, parents must talk to their kids about Internet safety and help teach them to identify and avoid dangerous situations," their report read.

The survey was conducted among a randomly selected, nationally representative group of more than 1,200 adults. The poll's margin of error was 2 to 8 percentage points.