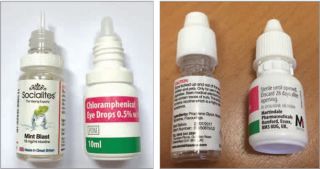 These images show the similarities between the e-cig liquid bottle and the eyedrops. The image on the left shows the fronts of both bottles, and the image on the right shows the backs of both bottles.
(Image: © Reproduced with permission from JAMA Ophthalmology. Published online Oct. 13, 2016: doi: doi:10.1001/jamaophthalmol.2016.3651. Copyright©(2016) American Medical Association. All rights reserved.)

A woman in Scotland was injured after she mistook a small bottle containing e-cigarette liquid for eyedrops, according to a new report of her case.

The woman, who was in her mid-50s, had been prescribed antibiotic eyedrops to treat a case of pink eye, but accidentally put the e-cig liquid into her eye instead of the medication, according to the report.

"We would like to raise awareness of this potential hazard that can result in an ocular chemical injury," the health care providers at Gartnavel General Hospital in Glasgow who treated the woman wrote in their report of her case.

The liquid used in e-cigarettes usually contains nicotine and chemicals such as propylene glycol, glycerin and, in some cases, flavorings, the authors said. The devices heat this liquid into a vapor that users inhale, and refills of the liquid are often sold in small bottles. [E-Cigarettes: What Vaping Does to Your Body]

The woman immediately realized her mistake. The e-cig liquid caused "instant [eye] pain, redness and blurred vision," according to the brief report, published Oct. 13 as a letter in the journal JAMA Ophthalmology.

The woman quickly washed out her eye with water and went to an emergency eye clinic, the authors wrote. She brought along the bottle of the e-cig liquid to show the doctors, according to the report. She told the doctors that she had stored the e-cig refill liquid in her medicine cabinet beside the antibiotic eye drops.

The doctors tested both the pH of the e-cig liquid and the pH of the woman's eye. The liquid had a pH of 6, making it slightly acidic.

Though acidic chemicals can cause damage to the eye, they are actually less damaging than alkaline chemicals. In a study from August 2016 in the same journal, researchers noted that acidic compounds cause proteins to build up in the eye, creating a barrier that can prevent further damage. In contrast, alkaline substances break down cell membranes, and can burn into the cornea, the transparent outer covering of the eye.

The doctors found that the woman's eye had a pH of 7, which is within the normal range for the eye, according to the American Academy of Ophthalmology (AAO). When people get chemicals in their eyes, the first thing that doctors should do is ensure that the pH is in the normal range of 7 to 7.2, the AAO says. If the pH is outside that range, it can be brought within that range by washing the eye with water.

The woman had some superficial damage to her cornea, but the e-cig liquid didn't cause any serious defects, the doctors wrote.

They noted in their letter that the e-cig liquid bottle contained no warnings about what should be done if someone got the liquid in their eye. Although the liquid that the woman used was only mildly acidic, the doctors wrote that these liquids can have a wide range of pH levels, from 4.7 (acidic) to 9.6 (alkaline).

One previous study has found that e-cig liquid may increase inflammation in people's airways. However, there have been no published studies on the effects of the liquid on the cells of the eye, according to the report.