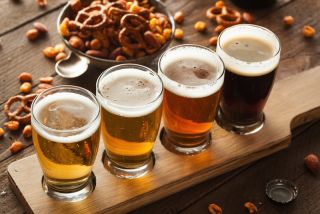 The hops found in beer not only add flavor, but also may lessen the damaging effects of alcohol on the liver, a new study in mice suggests.

"Our data suggest that hops content in beer is at least in part responsible for the less damaging effects of beer on the liver," over the short-term in mice, the researchers from Friedrich Schiller University Jena in Germany wrote in their study, published online Sept. 22 in the journal Alcohol and Alcoholism.

The researchers said their new findings may help explain why some earlier studies in people suggested that drinking hard liquor is more strongly associated with death from liver disease than drinking beer. Also, the researchers who worked on the new study had found in earlier work that mice accumulated less fat in their livers when they were given beer versus ethanol.

Hops refers to the flowers of the hops plant, Humulus lupulus. They are a main ingredient in beer, and are used to add flavor and act as a preservative. [Raise Your Glass: 10 Intoxicating Beer Facts]

The new study also suggested that hops may lower the formation of compounds called reactive oxygen species, which are highly reactive and can cause damage to cells in the liver.

However, future studies are needed to see if the same effects are found in people, and if these effects last for long periods, the researchers said. They noted that their study received funding from the German brewing industry.

William Kerr, a senior scientist at the Alcohol Research Group, part of the nonprofit Public Health Institute in Emeryville, California, said that, in some countries, consumption of hard liquor is more strongly linked to death from liver disease, compared to beer consumption.

But "beer does cause liver damage," added Kerr, who was not involved in the new study.

The reason for the weaker association between beer consumption and death from liver disease is not known. It's possible that people who drink spirits are more likely to be heavy drinkers than those who drink beer.

It's also possible that something about beer, like the ingredient hops, is protective against liver damage, Kerr said.

Still, Kerr said that the amount of hops in beer can vary quite a bit. The study tested only a single beer, a type of German pilsner, so it's not clear what level of hops in beer is needed to have the effect seen in the study.