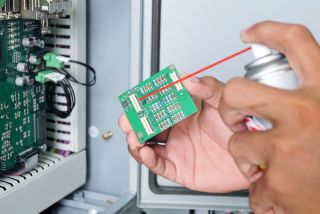 A man in New England developed a bone disease rarely seen in the United States due to his habit of huffing computer cleaner, according to a new report of the case.

The 28-year-old man's case began in September 2010, when he went to the doctor after experiencing hip pain, difficulty walking, trouble moving his right arm and wrist, and enlargement of the bones in his hands, according to the report. These problems had gone on for about two years, before which he had been healthy.

Doctors noted that the man's posture was stooped, that he walked with his torso titled to the left and that his hip joint had limited mobility. What's more, the bones of the man's fingers had expanded so much that they had become deformed, with "bony masses" on all of his fingers, the report said.

Tests showed that the bones in the man's spine, neck and hips were denser than normal. He also had high levels of the mineral fluoride in his blood. [Here's a Giant List of the Strangest Medical Cases We've Covered]

The man's symptoms, particularly his deformed fingers, are characteristic of a bone disease called skeletal fluorosis, which is caused by consuming too much fluoride. The disease is endemic in regions of the world where there are naturally high levels of fluoride in the drinking water, including some parts of India and China. But skeletal fluorosis is rare in Europe and North America. (Low levels of fluoride are added to drinking water in the United States to prevent cavities, but not at levels high enough to cause fluorosis.)

The fluoride levels in the man's drinking water were normal, so the doctors were not sure what might have caused his bone disease.

A clue came when Dr. Joseph Tucci, an endocrinologist who treated the man at Roger Williams Medical Center in Providence, Rhode Island, happened to find a report of a somewhat similar case that occurred in 2008. In that case, a 33-year-old man was in a car crash and had multiple fractures, but his doctors found that his fractures didn't heal properly; instead, there was rapid bone formation around some of the bones, as well as bone formation in soft tissue.

This 2008 report said that the man had crashed his car because he had been high from inhaling canned "dust spray" used to clean computers. The doctors involved in the case suspected that their patient's abuse of dust spray may have been at least partly to blame for the rapid bone formation.

After reading this earlier report, Tucci asked his patient, in the spring of 2011, whether the man had abused canned dust spray. The patient admitted that he had sniffed dust spray for three to four years, in order to get a high.

The dust spray contained difluoroethane, a compound made up of the elements carbon, hydrogen and fluorine. In the body, the breakdown of difluoroethane may produce fluoride, according to previous scientific studies.

When people consume excess fluoride, it's typically eliminated from the body by the kidneys. But if a person consumes a lot of fluoride, then over time, the fluoride forms crystal deposits on bone, leading to skeletal fluorosis. [The 7 Biggest Mysteries of the Human Body]

These effects are reversible after a person stops consuming excessive fluoride, but the reversal process is slow and can take many years, the report said.

In this case, the patient was able to quit his dust spray abuse in October 2011. He underwent a surgery of his hip joint in 2012 to help reduce the stiffness. Six months later, his hip function improved, and his gait was nearly normal, the report said.

Still, high levels of fluoride stayed in the man's system for years after he stopped abusing dust spray. The boney masses on his fingers became smaller and smoother over time, but they didn't go away completely. The doctors stopped seeing the patient in 2015, when he said he was not interested in further follow-up.

Tucci said the case "was something I had not seen before," and that he believes this is the first reported case of skeletal fluorosis due to inhaling dust spray. (In the 2008 report, the doctors diagnosed the man with a condition called heterotopic ossification, which involves bones growing abnormally in soft tissue, after an injury. At the time, they didn't suspect fluoride as the culprit, but did hypothesize that the chemical from dust spray was involved in the man's condition.)

Still, there may be other undiagnosed or unreported cases, given that abuse of dust spray is a known problem, particularly among teens. In 2014, about 150,000 U.S. teens ages 12 to 17 reported getting high off of inhalants, a category of substances that includes dust spray, according to the National Survey on Drug Use and Health.

"I'm sure there will be others, unfortunately," Tucci said.

The researchers contacted the makers of the dust spray about whether fluoride could build up in people who abused the product. The manufacturers said that the chemical difluoroethane is not broken down very well by the body, and that people typically breathe out much of the gas before they could ever metabolize it.

This explanation implied that there wouldn't be measurable levels of fluoride in the blood and urine of people who abuse the dusty spray, but this clearly wasn't the case for this patient, Tucci said.

There has been limited research on exactly of how difluoroethane breaks down in the bodies of people who inhale it. In a 2011 study, researchers in Germany were able to detect difluoroethane in study participants' blood soon after the individuals had inhaled it. Later, the researchers found that there was also a small amount of excess fluoride in the patients' urine samples.

The practice of sniffing dust spray is dangerous; it can cause the heart to beat erratically and can lead to sudden death. Animal studies have found that difluoroethane can cause harm to the central nervous system, lungs, heart, kidneys and bone marrow, according to the new report. [Trippy Tales: The History of 8 Hallucinogens]

The new case report was published on July 23 in the Journal of Bone and Mineral Research.