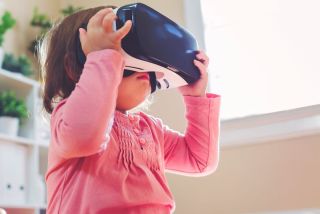 Virtual-reality headsets are likely to be at the top of many kids' wish lists this holiday season, but with many VR devices coming with age restrictions, is the technology safe for youngsters?

The Oculus Rift and Samsung's Gear VR headsets are recommended for ages 13+, while Sony's recommendation for its PlayStation VR is ages 12 and up. HTC's Vive is not designed for children, according to the company, and HTC said young children shouldn't be allowed to use the headset at all. And Google said its relatively low-tech Cardboard headset should be used by kids only under adult supervision.

Companies have offered little explanation for these age recommendations. So what does the science say? According to Marientina Gotsis, director of the Creative Media & Behavioral Health Center at the University of Southern California School of Cinematic Arts, not a lot. [Photos: Virtual Reality Puts Adults in a Child's World]

"We do not have enough data on the safety of current VR technology for children," she told Live Science. "So, the sparsity of research data and what we know about neuroplasticity [the brain's ability to reorganize itself] and children does not make me comfortable to recommend what is available now as is."

In a 2014 study in rats, researchers at the University of California found that the neurons in a brain region associated with spatial learning behaved completely differently in virtual environments compared to in real ones, with more than half of the neurons shutting down while in VR. What this means for humans is unclear, but the scientists said it highlighted the need for more research on the long-term effects of VR.

Gotsis said VR could have an even bigger impact on the developing brains of children. Her center uses entertainment technology, including VR, for mental and behavioral health research. She has worked on VR applications for children, but only in highly controlled situations.

"The brain is very plastic in young ages, and prolonged exposure with improperly fitted devices could incur damage," she said. "Children also may not understand how to communicate eyestrain and may lack reflexes to remove the devices if they find them uncomfortable."

Still, this does not necessarily mean that VR is unsafe for children and never can be, she said, adding that VR's safety varies according to the device, type of content and time spent using it, as well as on the individual child using it. [11 Facts Every Parent Should Know About Their Baby's Brain]

One of the biggest concerns is the impact VR tech could have on kids' eyes. Parents have long told children that staring at a screen will make their eyes go square, but the American Academy of Ophthalmology says there is no evidence that long exposure to screens can cause permanent damage.

But another issue with VR is the so-called vergence-accommodation conflict. When you view the world normally, your eye first points the eyeballs — vergence — and then focuses the lenses — accommodation — on an object, and then these two processes are coupled to create a coherent picture.

Modern VR headsets achieve the illusion of depth by presenting each eye with a slightly different image on a flat screen. This means that, no matter how far away an object appears, the eyes remain focused on a fixed point, but they converge on something in the virtual distance.

"Some scientists believe this is the reason some people experience symptoms when viewing 3D stimuli — TV and cinema, as well as headsets," said Peter Howarth, an optometrist and senior lecturer in visual ergonomics at Loughborough University in the United Kingdom.

However, Howarth said there is good evidence to suggest that only those with already weak eye movement and control are likely to experience adverse effects such as headaches and eyestrain. For children, these symptoms are good indicators that these kids need to get their eyes checked, so VR headsets may actually help catch existing problems, he added.

Howarth said that, as far as he knows, no academic studies have been done to investigate the effects of VR on children's eyes, though it's possible that VR headset manufacturers have done research in this area. "My guess is that they're simply covering their backs so that if a child develops a squint, they will not be held responsible," he told Live Science.

Michael Madary, a postdoctoral research assistant at the University of Mainz in Germany, who in February co-authored the first code of ethics on the use of VR, said the dearth of research on VR's effects on children is unlikely to improve.

"For obvious ethical reasons, it's very difficult to do research using children as subjects," he told Live Science. Madary studies the ethics of emerging technologies, incorporating results from psychology and neuroscience, and he thinks the biggest concern with VR is its effect on children's psychological development.

"Children, at a young age, have difficulty distinguishing reality from fiction or fantasy," Madary said. "You could imagine putting them in VR — that inability to distinguish could be exaggerated."

For instance, content that could be traumatic when seen in the cinema is likely to have an even bigger impact in VR. And the negative effects of advertising and unsavory role models on TV could be exacerbated considerably by VR, Madary added.

"In VR, you have an entire environment designed by someone who may want to manipulate you, whether it's for advertising, for political reasons, for religious reasons," he said. "If you have a child spending a long time immersed in a VR environment where manipulation is going on, it could be seen as a threat to their autonomy and what kind of adult they become."

And though VR holds great potential, including for educational and therapeutic uses, Madary said manufacturers need to team up with scientists to investigate the long-term implications of the technology. Until then, he recommends erring on the side of caution.

"I suspect that if parents are doing a good job as parents, that's pretty much the most important factor," he said. "It's just exercising extreme caution and knowing that the experiments have not been done, so you're experimenting on your kids."

Editor's Note: Our sister-site, Tom's Hardware, has a great primer on how virtual reality has evolved since the 1950s. And if you're in the market for VR, check out Tom's Guide's virtual reality headset recommendations.