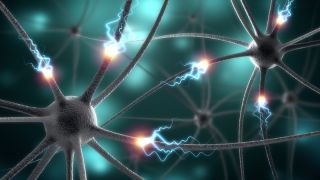 A brain-inspired computing component provides the most faithful emulation yet of connections among neurons in the human brain, researchers say.

The so-called memristor, an electrical component whose resistance relies on how much charge has passed through it in the past, mimics the way calcium ions behave at the junction between two neurons in the human brain, the study said. That junction is known as a synapse. The researchers said the new device could lead to significant advances in brain-inspired — or neuromorphic — computers, which could be much better at perceptual and learning tasks than traditional computers, as well as far more energy efficient.

"In the past, people have used devices like transistors and capacitors to simulate synaptic dynamics, which can work, but those devices have very little resemblance to real biological systems. So it's not efficient to do it that way, and it results in a larger device area, larger energy consumption and less fidelity," said study leader Joshua Yang, a professor of electrical and computer engineering at the University of Massachusetts Amherst. [10 Things You Didn't Know About the Brain]

Previous research has suggested that the human brain has about 100 billion neurons and approximately 1 quadrillion (1 million billion) synapses. A brain-inspired computer would ideally be designed to mimic the brain's enormous computing power and efficiency, scientists have said.

"With the synaptic dynamics provided by our device, we can emulate the synapse in a more natural way, more direct way and with more fidelity," he told Live Science. "You don't just simulate one type of synaptic function, but [also] other important features and actually get multiple synaptic functions together."

In biological systems, when a nerve impulse reaches a synapse, it causes channels to open, allowing calcium ions to flood into the synapse. This triggers the release of brain chemicals known as neurotransmitters that cross the gap between the two nerve cells, passing on the impulse to the next neuron.

The new "diffusive memristor" described in the study consists of silver nanoparticle clusters embedded in a silicon oxynitride film that is sandwiched between two electrodes.

The film is an insulator, but when a voltage pulse is applied, a combination of heating and electrical forces causes the clusters to break up. Nanoparticles diffuse through the film and eventually form a conductive filament that carries the current from one electrode to the other. Once the voltage is removed, the temperature drops and the nanoparticles coalesce back into clusters.

Because this process is very similar to how calcium ions behave in biological synapses, the device can mimic short-term plasticity in neurons, the researchers said. Trains of low-voltage pulses at high frequencies will gradually increase the conductivity of the device until a current can pass through, but if the pulses continue, this conductivity will eventually decline. [Super-Intelligent Machines: 7 Robotic Futures]

The researchers also combined their diffusion memristor with a so-called drift memristor, which relies on electrical fields rather than diffusion and is optimized for memory applications. This allowed the scientists to demonstrate a form of long-term plasticity called spike-timing-dependent plasticity (STDP), which adjusts connection strength between neurons based on the timing of impulses.

Previous studies have used drift memristors by themselves to approximate calcium dynamics. But these memristors are based on physical processes very different from those in biological synapses, which limits their fidelity and the variety of possible synaptic functions, Yang said.

"The diffusion memristor is helping the drift-type memristor behave similarly to a real synapse," Yang said. "Combining the two leads us to a natural demonstration of STDP, which is a very important long-term plasticity learning rule."

Accurately reproducing synaptic plasticity is essential for creating computers that can operate like the brain. Yang said this is desirable because the brain is far more compact and energy efficient than traditional electronics, as well as being better at things like pattern recognition and learning. "The human brain is still the most efficient computer ever built," he added.

How to build it

Yang said his group uses fabrication processes similar to those being developed by computer memory companies to scale up memristor production. Not all of these processes can use silver as a material, but unpublished research by the team shows that copper nanoparticles could be used instead, Yang said.

Hypothetically, the device could be made even smaller than a human synapse, because the key part of the device measures just 4 nanometers across, Yang said. (For comparison, an average strand of human hair is about 100,000 nanometers wide.) This could make the devices much more efficient than traditional electronics for building brain-inspired computers, Yang added. Traditional electronics need roughly 10 transistors to emulate one synapse.

The research is the most complete demonstration of an artificial synapse so far in terms of the variety of functions it is capable of, said neuromorphic computing expert Ilia Valov, a senior scientist at the Peter Grunberg Institute at the Jülich Research Centre in Germany.

He said the approach is definitely scalable and single-unit systems should certainly be able to get down to the scale of biological synapses. But he added that in multiunit systems, the devices will likely need to be bigger due to practical considerations involved in making a larger system work.

The study's findings were published online today (Sept. 26) in the journal Nature Materials.