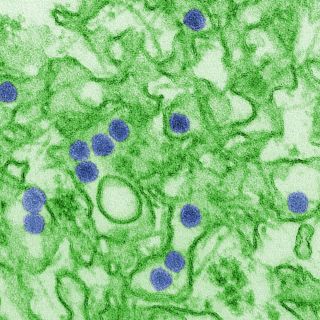 This digitally-colorized image shows particles of Zika virus, which is a member of the family Flaviviridae. The virus particles are colored blue in the picture. They are 40 nanometers (0.00004 millimeters) in diameter.
(Image: © CDC/Cynthia Goldsmith)

A man in Spain may have passed the Zika virus to his wife through sex, even though he'd previously had a vasectomy, according to a new report of the case.

The 53-year-old man and his 51-year-old wife had gone on vacation to the Maldives islands in the Indian Ocean in early February this year, the report said. They spent 10 days on the islands, and returned to Madrid in mid-February. They both got mosquito bites on the trip.

A few days after their return, the man developed symptoms of Zika infection, including a fever, rash, headache and joint pain, which went away after about a week. When the man had nearly completely recovered from the infection, the couple had unprotected sexual intercourse.

In men who've undergone a vasectomy, sperm from the testes cannot make their way into semen. These men still ejaculate semen during sex, but the semen contains no sperm. (Sperm are men's reproductive cells, whereas semen is usually a mixture of sperm and other fluids.)

A week later, (which was two weeks after the man first showed symptoms), the woman also developed symptoms of Zika.

Doctors tested blood and urine samples from the husband and wife, as well as the husband's semen. The woman's urine sample tested positive for Zika virus, as did the man's semen sample. [Zika Virus News: Complete Coverage of the Outbreak]

It's likely that the man became infected from a mosquito bite he got when the couple was in the Maldives. Zika is primarily transmitted by mosquitoes, and mosquitoes infected with Zika are known to be present in the Maldives, according to the Centers for Disease Control and Prevention.

But the woman didn't develop symptoms until 18 days after she returned from the trip. For a Zika virus infection, this incubation period (or the time it takes a person to show symptoms after he or she is infected) would be "exceptionally long," the researchers said. It's thought that the incubation period for Zika is between three and 12 days, according to the European Centre for Disease Prevention and Control.

This case suggests that, rather than hiding exclusively in sperm, the Zika virus may be present in other fluids that make up semen, such as fluid from male reproductive glands, or pre-ejaculate secretions, the report said.

"Public health recommendations to prevent sexual transmission of Zika virus should take these data into consideration," and should recommend use of protection during sex after travel to an area with Zika, even if a man has had a vasectomy, the report said.

The World Health Organization currently recommends that men and women returning from areas with Zika transmission should use protection for at least six months after their return.