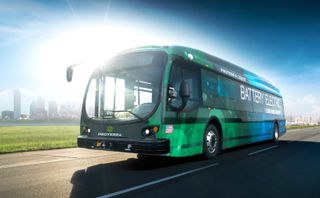 The electric city bus, planned for release next year, could in many places complete a full day’s worth of routes on just one charge.
(Image: © Proterra)

A new electric, zero-emission vehicle has an impressive range: The city bus can travel 350 miles (560 kilometers) on a single charge, potentially being able to complete a full day's work without needing to be recharged.

Set for release next year from the startup Proterra, the Catalyst E2 Series electric vehicle debuted last week at the American Public Transit Association (APTA) Annual Meeting in Los Angeles. Proterra named the new bus for its unprecedented battery, which can store up to 660 kWh. In comparison, the Chevy's electric passenger car

With a nominal range of 194 to 350 miles (310 to 560 km), Proterra claims that the Catalyst E2 series is capable of fulfilling a full day's mileage on one charge for nearly every U.S. mass transit route.

"Proterra's primary goal has always been to create a purpose-built, high-performance electric vehicle that can serve every single transit route in the United States. Today, with the unveiling of the Catalyst E2 Series, that goal has been achieved," Ryan Popple, CEO of Proterra, said in a statement. "With the Catalyst E2 offering a no-compromise replacement for all fossil fuel buses, battery-electric vehicles have now broken down the final barrier to widespread market adoption."

One hurdle for electric vehicles can be the need for charging infrastructure. For public buses, however, there is no need for extensive charging stations because the vehicles drive along defined routes. They are also usually parked overnight, so the long charge times — a Catalyst E2 Series takes 3 to 5 hours for a full charge — are less problematic.

Interest in Proterra's existing lineup of electric buses is on the rise, according to the company, with sales that are 220 percent higher in 2016 than they were in 2015. Due to the demand, the manufacturer plans to double production in 2017.

To date, Proterra has sold more than 312 vehicles to 35 different municipal, university and commercial transit agencies. The company estimates that its buses across the U.S. have displaced 540,000 gallons of diesel fuel and eliminated more than 10 million pounds of carbon emissions.

"We just surpassed one million miles of revenue service with our battery-electric Proterra fleet, and we're looking forward to many more miles to come," Doran Barnes, executive director at Foothill Transit in Southern California, said in the statement. "Since our first EV bus procurement with Proterra in 2010, we knew that zero-emission buses were the future of mass transit. Now, with the new Catalyst E2, this vision is a reality. We're excited by the possibilities of an all-electric future."