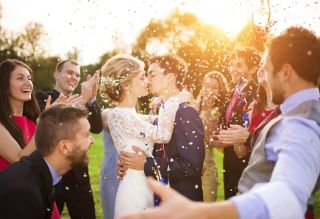 With wedding season still in full swing, one researcher is finding a growing nuptial trend: An increasing percentage of couples are opting to have a friend or family member get ordained in order to marry them, a recent study finds.

It's unclear how many U.S. weddings are led by such officiants, but the percentage is clearly rising, said study researcher Dusty Hoesly, a doctoral candidate of religious studies at the University of California, Santa Barbara. Most people who perform these weddings get an ordination from the Universal Life Church (ULC), which has ordained more than 20 million people since 1962, Hoesly said.

"The point is, it's growing, whichever pool of people you're looking at," he said. [I Don't: 5 Myths About Marriage | Weddings & Divorce]

Today, more couples want their wedding to reflect their worldviews, Hoesly said. "They are less willing to defer to traditional religious authorities in a church wedding, or to civil officials who could perform a secular ceremony in a bureaucratic office building," he wrote in the study.

Couples who have a ULC minister perform their wedding have the freedom to design their ceremony and to choose whether to include religious elements. For instance, one couple asked the friend who officiated their ceremony to read from a book they both loved as children, Hoesly said.

Hoesly began his research after officiating 10 weddings for friends and family, he told Live Science.

There are now several affiliated and competing ULC offshoots that offer similar ordination options, but many follow the tenets of ULC, which is free, legal and allows any ordained person to call himself or herself a minister, rabbi, priest or pastor, according to the ULC website.

In his study, Hoesly gave online surveys to nearly 1,600 ULC ministers. He also carried out 93 in-depth interviews with both ministers and couples whose weddings were officiated by ULC clergy, and interviewed the president of ULC and officials from several organizations like it, he said.

Of the 1,584 ULC ministers in the survey, 32 percent said they joined the ULC in order to officiate a wedding, whereas 28 percent joined to further develop their spiritual or religious journey. Others joined for various other reasons, including "as a lark," meaning they did it for fun or for the experience, he said. (Some of the ministers in the survey were also individuals who were married by a ULC officiant.)

About 45 percent of the ministers described themselves as "sort of" or "very" religious, while another 42 percent called themselves "not really religious" or "not at all religious," including 14 percent who said they were atheist. However, the majority (94 percent) identified as spiritual, Hoesly said. [6 Scientific Tips for a Successful Marriage]

"This reveals a paradoxical fact about the ULC" — mainly, that it's a church, but many of its ministers are not religious, Hoesly wrote in the study. He noted that the younger participants were less likely to identify as religious.

This isn't too surprising, given that the percentage of people in the U.S. who say they are not affiliated with any religion rose from 7 percent in 1972 to 18 percent in 2010, Hoesly said.

Likewise, many wedding ceremonies lacked religious norms, Hoesly said. While most included the traditions of walking down an aisle and exchanging vows and rings, 71 percent of couples married by a ULC minister didn't have any religious or spiritual readings or text, Hoesly wrote in the study.

He added that many same-sex couples opt to have ULC officiants marry them, as it can be difficult to find a religious officiant who respects their beliefs.

The study, which was published in 2015 in the journal Secularism and Nonreligion, was presented at the American Sociological Association's annual meeting in Seattle in August.