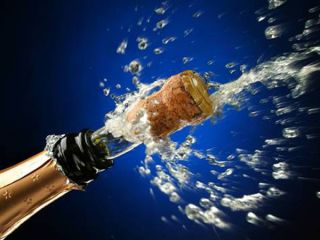 The tradition of drinking champagne to mark celebrations originated in the royal courts of Europe prior to 1789, where the expensive drink was viewed as a status symbol.
(Image: © Stockxpert)

Popping the cork and toasting with sparkling, fizzy champagne as the clock strikes midnight on New Year's Eve is a tradition in many households around the world. Why is champagne used to mark special occasions and what's its significance?

The bubbly, light-colored wine has historically been associated with luxury and the parties of the royal courts and aristocracy of Europe, said Kolleen M. Guy, associate professor of history at the University of Texas at San Antonio and author of "When Champagne Became French" (The Johns Hopkins University Press, 2003).

"After the French Revolution, it became a part of the secular rituals that replaced formerly religious rituals," Guy told Life's Little Mysteries. "You could 'christen a ship' without a priest, for example, by using the 'holy water' of champagne." The drink came to be opened at weddings, baptisms and other religious events, she said.

Champagne was originally produced in England, where the technology for bottling and corking drinks containing carbon dioxide was developed in the latter part of the 1500s, according to "Wine Science: Principles and Applications" (Academic Press, 2008). In 1662, scientist Christopher Merret reported to the Royal Society of London that adding sugar "promoted effervescence," lending champagne its signature sparkle.

However, determining the right amount of sugar required and avoiding bottle explosions took chemists almost a century to perfect, Ronald S. Jackson notes in "Wine Science." The original, sweet version became trendy in Paris among the wealthy, while the English preferred their champagne dry, and the English wine-making method became prevalent throughout most of the wine-making world.

The tradition of drinking champagne to mark celebrations originated in the royal courts of Europe prior to 1789, where the expensive drink was viewed as a status symbol.

"Royalty loved the novelty of sparkling line. It was said to have positive effects on women's beauty and man's wit," Guy said.

Champagne became a world-wide drinking phenomenon in the late nineteenth century, according to Guy. Today, it's often used to commemorate joyous occasions, from smashing bottles against a ship before its maiden voyage to throwing champagne glasses on the floor at Russian weddings.

"In a secular society, we want to mark both the joy and sanctity of the occasion," Guy said. "Champagne does this symbolically, but also visually, since it overflows in abundance and joy."

Just the act of opening a champagne bottle is enough to mark a celebration, and in some cases, the bubbling beverage isn't even consumed during the festivities, Guy said.

"Many athletes and race car drivers have champagne poured on them...but don't drink it," she said, "I would say that champagne is important symbolically."