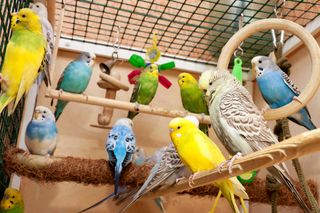 Bird-keepers, beware: A bird enthusiast in England ended up in the hospital with a serious infection that started with one of his pet birds, according to a new report of his case.

The 61-year-old man was hospitalized with serious flu-like symptoms, according to the report, published today (Sept. 12) in the journal BMJ Case Reports. The man had been feeling sick for a week before going to the hospital, and by the time he arrived, he was in respiratory failure, meaning his respiratory system was not getting enough oxygen to the rest of his body, according to the doctors who treated him.

The doctors ran a number of tests on the man, but it wasn't until the man's second day in the intensive-care unit (ICU) that the doctors learned that the man was an avid bird-keeper — and more importantly, that two of his pet birds had recently died, said Dr. Anne-Marie Ionescu, a junior doctor in intensive care and anesthetics at the University Hospitals Coventry and Warwickshire in England, who treated the man and was the lead author of the report. This bit of information led doctors to suspect that the man had psittacosis, or "parrot fever."

This illness is a type of pneumonia caused by the bacterium Chlamydia psittaci, which can be deadly in birds. Despite the fever's name, parrots aren't the only birds that can get the bacterial infection: parakeets, macaws, turkeys and ducks can also get parrot fever, according to the Centers for Disease Control and Prevention (CDC).

In birds, parrot fever can cause weight loss, difficulty breathing, watery green droppings, pink eyes, discharge from the eyes or nares (the small holes on a bird's beak), or sudden death, according to the report. But some birds can also be asymptomatic, meaning that they don't get sick, according to the CDC.

Humans can catch parrot fever if they breathe in particles of a sick bird's droppings, feather dust or snot that contain the bacteria, according to the report. In people, the infection can cause flu-like symptoms, a slower-than-normal heartbeat and a rash, the report said. The illness can also cause neurological symptoms including severe headaches and "photophobia," or extreme sensitivity to light, the report's authors wrote. But symptoms such as confusion and seizures, which the man experienced, are rare for people with parrot fever, Ionescu said.

Once the doctors learned about the man's pet birds, they tested him for C. psittaci. Tests of his blood and sputum (a mix of saliva and mucus) showed signs of the bacteria, according to the report.

Upon hearing the diagnosis, both the man and his wife were surprised, as neither were familiar with the disease, Ionescu said.

Indeed, parrot fever in people is rare: About 50 cases are confirmed each year in England and Wales, according to the report. In the United States, there have been fewer than 10 cases each year since 2010, the CDC said.

The man was given an antibiotic called doxycycline, and was able to leave the ICU after about a week, Ionescu said. He was doing much better at that point, she added.

However, the condition can be fatal if it goes untreated, Ionescu told Live Science. What makes parrot fever risky is that the doctors may not know to test for it, or patients may not be aware of having come into contact with a bird, Ionescu said. When parrot fever isn't treated with the proper antibiotics, patients run the risk of the developing deadly complications, she said.

In this case, the man recovered well and was discharged from the hospital, according to the report. Several weeks after the man left the hospital, he developed knee pain. The doctors said that this pain occurs in response to parrot fever in about two-thirds of all patients.

Ionescu noted that the man still had all of his pet birds when he was discharged from the hospital, but that his wife was considering whether or not they should keep them — or at least have them all checked out by a vet.

Editor's note: This article was updated on Sept. 13 to include information from the study author.